The devil says I’m out, but the Lord says I’m safe.” – Billy Sunday”

A baseball star, Billy Sunday played for the Chicago White Stockings in the 1880’s and later the Philadelphia Phillies. Born during the Civil War in a log cabin in Iowa, his father, who was a Union Army soldier, died of pneumonia when Billy was a month old.

At age 15, Billy Sunday struck out on his own, working several jobs before playing baseball. His career took off when he was recruited by A.G. Spalding, owner of the White Stockings and founder of Spalding Sporting Goods Company. Billy Sunday became one of the most popular athletes in the nation. 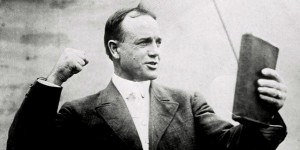 While leaving a Chicago saloon with some other players in 1886, he heard a group of gospel singers on the street from the Pacific Garden Mission. Attracted by the hymns, as they were the same ones his mother used to sing, Billy Sunday went to listen.

A national sensation occurred FEBRUARY 17, 1889, when Billy Sunday preached his first sermon as a Christian evangelist in Chicago. He went on to pioneer radio preaching, and did so enthusiastically that the FCC was formed when his radio signal overlapped ballgame broadcasts. During the next 46 years, till his death November 6, 1935, over 100 million people heard Billy Sunday preach.

Commenting on prevailing Christian sentiments, Billy Sunday stated: “Rivers of America will run with blood filled to their banks before we will submit to them taking the Bible out of our schools.”

In his animated style, Billy Sunday said: “The devil says I’m out, but the Lord says I’m safe.” “Temptation is the devil looking through the keyhole. Yielding is opening the door and inviting him in.” “Going to church doesn’t make you a Christian any more than going to a garage makes you an automobile.” “I never see a man or a woman or boy or girl but I do not think that God has a plan for them… He will use each of us to His glory if we will only let Him.”

Billy Sunday’s preaching against alcohol led to the passage of the 18th Amendment. He stated: “I am the sworn, eternal, uncompromising enemy of the Liquor Traffic. I ask no quarter and I give none. I have drawn the sword in defense of God, home, wife, children and native land, and I will never sheathe it until the undertaker pumps me full of embalming fluid, and if my wife is alive, I think I shall call her to my beside and say:

‘Nell, when I am dead, send for the butcher and skin me, and have my hide tanned and made into drum heads, and hire men to go up and down the land and beat the drums and say, ‘My husband, “Bill” Sunday still lives and gives the whiskey gang a run for its money.'”

Billy Sunday’s revival preaching followed in the tradition of: Scotland revivals beginning in the 1730s; the First Great Awakening preaching of George Whitefield; the Second Great Awakening camp meetings; the pre-Civil War preaching of Charles Finney; the post-Civil War evangelist D.L. Moody; and the Welsh revivals at the turn of the last century.

Billy Sunday inspired famous tent evangelists and revival preacher such as Oral Roberts and Billy Graham. He spoke in city after city across America where tens of thousands heard him in month long meetings. Huge wooded auditoriums, called Billy Sunday Tabernacles, were built to accommodate the crowds.

The Billy Sunday Tabernacle in Winona was the largest auditorium in northern Indiana for many years, seating 7,500. A Billy Sunday museum is on the campus of Grace College and Seminary in Winona Lake, Indiana.
In 1910, Billy Sunday preached a historic revival in Joplin, Missouri, a mining town known for hotels, women of the night, gambling and saloons. Rev. Frank Neff of the Independence Avenue Methodist Episcopal Church in Kansas City, and president of the Ministers Alliance of Joplin, told reporters:

“We expect a great clean up in the city, but it will be in the nature of a religious awakening which will result in a permanent clean up and will come from a sincere desire of the people.”

During Joplin’s “Fifty Days of Sunday,” Billy Sunday explained: “A revival is the conviction of sin. Inside the church there must be a spiritual revival before it gets outside.”

Teaching that salvation was through faith in Jesus Christ, not in organized religion, Billy Sunday explained that churches were fine so far as they were “in the world, but all wrong when the world is in them,” adding: “You can go to hell just as fast from the church door as from the grog shop or bawdy house.”

Billy Sunday once stated: “Live so that when the final summons comes you will leave something more behind you than an epitaph on a tombstone.”