Last month I was at church watching the Super Bowl with a bunch of young adults in the student ministry. We had a concert planned for the halftime show, and I was in the sound booth watching hundreds of young people enjoy contemporary music that glorified Jesus. My phone started to buzz over and over with friends of mine asking if I saw the Super Bowl half-time show. I knew instantly that it had to do with gay awareness and homosexuality.

The moment I looked at the live TV screen, I saw an entire football stadium designed in rainbow colors that read, “Believe In Love.” Over 114 million people tuned in around the world to be made more aware and celebrate homosexuality from the largest single platform on the planet. 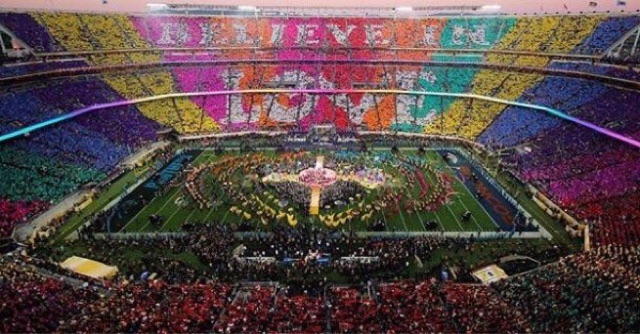 The world is celebrating a definition of love that has no biblical foundation. The Bible tells us that “love does not delight in evil but rejoiced in the truth” (1 Cor. 13:6). If the Bible refers to homosexual practice on all account as evil (ungodly) behavior, then it can’t be love as God defines it or intended it. It’s a carnal love, a deceptive love, a love of the world masquerading as the love of God. They can wrap their slogan of gay awareness in the rainbow, but that doesn’t make their love godly.

In my new book, Gay Awareness, I write about the revelation God gave me on the rainbow and why the gay community uses it as their banner.

Over the years, it has grieved me that the gay community has adopted the rainbow as their emblem. This was the sign to the people of God that He would never again destroy the earth with a flood. Genesis 9:13 says, “I have set My rainbow in the cloud, and it shall be a sign of a covenant between Me and the earth.” The interesting part is the relationship between the rainbow on the banner of the gay community and a sign of the promise of God related to God’s judgment on the world. The people who don’t want to be judged chose the sign of God’s promise against the backdrop of God’s judgment of the world.

I began to pray and ask God to speak to me concerning why the gay community chose the rainbow as their own. One day, in the middle of my daily Bible reading, I came across the reason. Revelation 4:3 says, “And He who sat there appeared like a jasper and a sardius stone. There was a rainbow around the throne, appearing like an emerald.” Follow me on this. In Revelation 4, God was showing the disciple John a vision of heaven and the throne room of God. John puts into words what he saw in the presence of God, and describes it and all of its colors like a rainbow.

Gay awareness continues to sweep across the world, with America leading the way. Tens of thousands participated while hundreds of millions watched as our nation waved the banners of judgment celebrating our belief in love while denying the God of love.