16 UNBELIEVABLE ‘CRIMES’ That Can Get You Executed In Saudi Arabia

Saudi Arabia has once again made headlines for handing out gruesome, and very public, punishments in record numbers. The kingdom has already executed over 200 people this year, exceeding its modern-day execution record of 192, set back in 1995.

According to Vocativ, there are at least 16 “crimes” which can result in a death sentence in Saudi Arabia. More than a third of those crimes wouldn’t even get you jail time in the U.S. On that list: apostasy, sorcery, witchcraft, and adultery. Approximately half of those executed so far this year were convicted of non-violent drug crimes, according to Human Rights Watch. Only 57 were Saudi citizens.

While beheading infidels, hanging drug dealers, stoning disobedient women to death and throwing gay men off “The tallest building in the city” seem like perfectly acceptable punishments in this bizarre society, the rest of the civilized world stands by watching in horror as one human being after another has their life taken in the most horrendous manner, often for the most absurd crime, if you can call it that.

For the Muslim people who approve, justification for the atrocities comes from the words of the Angel Gabriel directly to the Islamic Prophet Mohammad. It’s tough to argue with an angel. We’ve been waiting well over a thousand years for the sheep to begin questioning a divine source that dictates such intolerance and hate, but it is only getting worse.

Saudi Arabia’s use of punishment is rooted in Wahhabi doctrine and fortunately, is not replicated anywhere else in the world, reports middleeasteye.net. 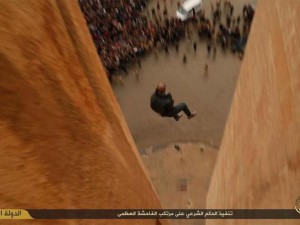 Homosexual Man Falling To His Death For Being Gay. If The Fall Doesn’t Kill Him The Koran Demands That The Crowd Stone Him To Death.

Islamic law claims that they set the bar high when it comes to convicting people of hadd crimes. In the case of adultery, the accused must confess to the crime three times in court; if he refuses, which would likely be the case, conviction requires the testimony of four male witnesses or eight female witnesses. That’s considerate of them.

“The doctrines formulated by Muslim jurists in the Middle Ages made it difficult to convict, either because they defined the crimes extremely narrowly or because the requirement for evidence was extremely high,” said Joseph E. Lowry, Associate Professor of Arabic and Islamic Studies at the University of Pennsylvania.

“It wouldn’t be sensible to go around maiming the population. There was a realistic view of the punishments, and the jurists were generally humane. The jurisprudence is generally favorable to the defendant.”

The jurists are so ‘realistic’ and ‘humane’ that they make it difficult to execute people for being gay, for having sex, or for leaving the Muslim faith? How incredibly kind. 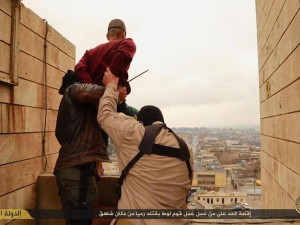 Muslim Executioners Prepare To Throw A Blindfolded Man Off The Roof To His Death. His Crime? Being Gay.

While they may claim to be ‘favorable’ to the defendant, there are still atrocities occurring every day that would turn the stomach of any sane American. Atrocities that make you wonder how, in a world that applauds tolerance, there are still people who support a government that is so inhumanely intolerant.