23 Blast, a Film of Tragedy and Hope, Darkness and Light

By Janey DeMeo
VISTA, CA (ANS) — 23 Blast, based on the true story of Travis Freeman, is a film of tragedy and hope, darkness and light. 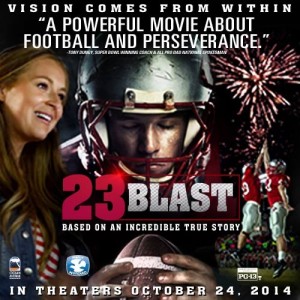 Freeman, played by Mark Hapka (Days of Our Lives, Criminal Minds), has not only lost his sight but his ability to live out his passion and continue playing football. But that passion will not quit and he finds himself dreaming football every time the game is played without him.When Travis Freeman a high-school football player, became blind from a football accident, his world, his hope and future looked to have come to an end. How could such a tragedy hit someone so young and so talented?

Friends, family, and therapists help push Freeman along to a life worth living in spite of blindness.

Coming to theaters on October 24th, you don’t want to miss this film. Ocean Avenue Entertainment and K-Love/AIR1 radio have teamed up to support this family-friendly feature film, 23 Blast.

So, what does Travis Freeman think of the movie inspired by his story? Check out my interview below.

JD-HI Travis, good to meet you. Were you a strong believer before losing your sight?

TF-Yes. I professed faith at age eleven, the summer before I lost my site. (I lost my sight at 12-years-old.) Thank God, I was grounded in the faith by a strong family.

JD-How did the film affect you? Did you find yourself reliving that period of your life?

TF-Yes, definitely. But the film is not the Travis Freeman story. It is only loosely inspired by my story. But the film does a good job and gets the message across.

TF-Disability is not equal to inability. When we have strong faith, we can overcome obstacles. When I became blind, my life was turned upside down. It took me a year to learn to live life again. And by the end of 7th Grade, I’d assimilated back into normal life. When my mom asked the coach if I could just be an extra part of the team, he said, “No. If Travis is to be part of the team, I want him to play.”

So in August 1994, I became the first blind football player. It wasn’t anything special to me. I was living my life. It seemed normal. It wasn’t spectacular to me.

JD-When did you feel the call to serve God and what are you doing now?

TF-When I was a sophomore in college. I then graduated from the University of Kentucky, then got my Masters of Theology and a Ph.D. from the Southern Baptist Theological Seminary. I’m presently an adjunct professor at the University of Cumberland.

In the future I’d like to teach full-time as a college professor and, at some point, to travel, write, and speak. Also to focus more on the Travis Freeman Foundation. Travis has also written his autobiography, Lights Out, Living in a Dark World. Find it on his website: www.travisfreeman.org.