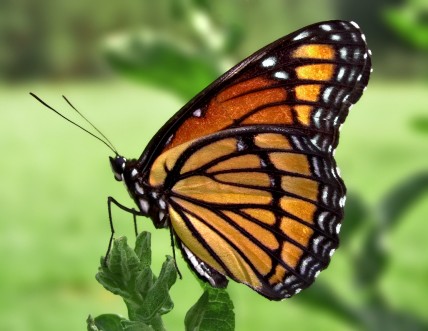 (NaturalNews) Dozens of House Democrats have signed onto a letter sent to President Obama claiming that the spread of GM crops is leading to the death of monarch butterflies.

The letter, authored by Rep. Chellie Pingree of Maine, says that the butterflies are “in peril of being lost to the history books” in large part because of the “virtual eradication” of milkweed plants from their primary breeding grounds in the Midwest.

The milkweed eradication, the letter states, has come primarily from the “widespread spraying of herbicides in agricultural areas” where the plants were once bountiful.

“The continued gradual loss of milkweed habitats in migration and breeding areas as well as the increased use of pesticides that kill them directly has led to a dramatic reduction in the number of monarch butterflies,” the Congress members state.

The lawmakers said the deadly combination has led to a 90 percent reduction in butterfly numbers since 1990.

“Recovering the monarch butterfly to ensure that our children and grandchildren will be able to marvel at this natural spectacle requires an immediate and serious investment in conservation efforts across the federal government,” say the lawmakers.

They acknowledged that efforts by local farmers to plant milkweed are “laudable” and are helping to keep butterfly numbers from falling even more dramatically. But, they argued, a much larger effort is needed to save the species.

For that, the lawmakers have requested that Obama use the regulatory authority under the Endangered Species Act as “…the last best chance to save this amazing species and its incredible migration.”

The law “…has the necessary legal mechanisms to ensure that the ecosystems that the monarchs depend on are adequately protected,” they said. In addition, using the ESA “…would unify and coordinate conservation efforts, and would bring much-needed resources and funding for monarch conservation efforts.”

The lawmakers noted they were “encouraged” by a recent announcement from the U.S. Fish and Wildlife Service that the butterfly may warrant protection as an endangered species. As such, “…we urge FWS to conduct a timely review to determine if protections under the Endangered Species Act are warranted,” they said.

“We are encouraged by the early voluntary measures that have begun restoring milkweed,” they continued, “but these efforts will likely be insufficient if the root causes of the monarch’s decline remain unaddressed.” They further urged Obama to “be bold” in his actions.

Monsanto will have the final say

Some have said the effort, while noble, is probably a lost cause. “It’s hard to imagine that anything short of a phase-out of herbicide-tolerant crops will save the monarch,” said GMWatch, in citing the letter.

Conservation supporters, however, say the effort is worth it. “The situation is so dire, scientists and environmental groups warn that we could see the great monarch migration virtually disappear in a generation, if not sooner,” wrote Jason Best, over at TakePart.com.

Still, he notes that few of the signatories to the letter are from farm belt states, where constituents have far less influence with their elected representatives than, say, Monsanto and Syngenta.

“It’s no coincidence, however, that only a scant handful of representatives who signed the letter hail from Farm Belt states–a mere three by my count–just as it’s no coincidence that the monarch’s precipitous plunge can be traced to the mid-1990s,” wrote Best. “That’s when agri-tech giant Monsanto released the first in its patented line of ‘Roundup Ready’ crops.”