(Christian Post) A Chaldean Catholic bishop in Syria has warned that two-thirds of all Christians in the war-torn country have left since the conflict began in March 2011, which means close to a million believers have fled the country.

Antoine Audo told reporters that there were close to 1.5 million Christians in Syria in 2011, but five years later there are now only around 500,000 left. 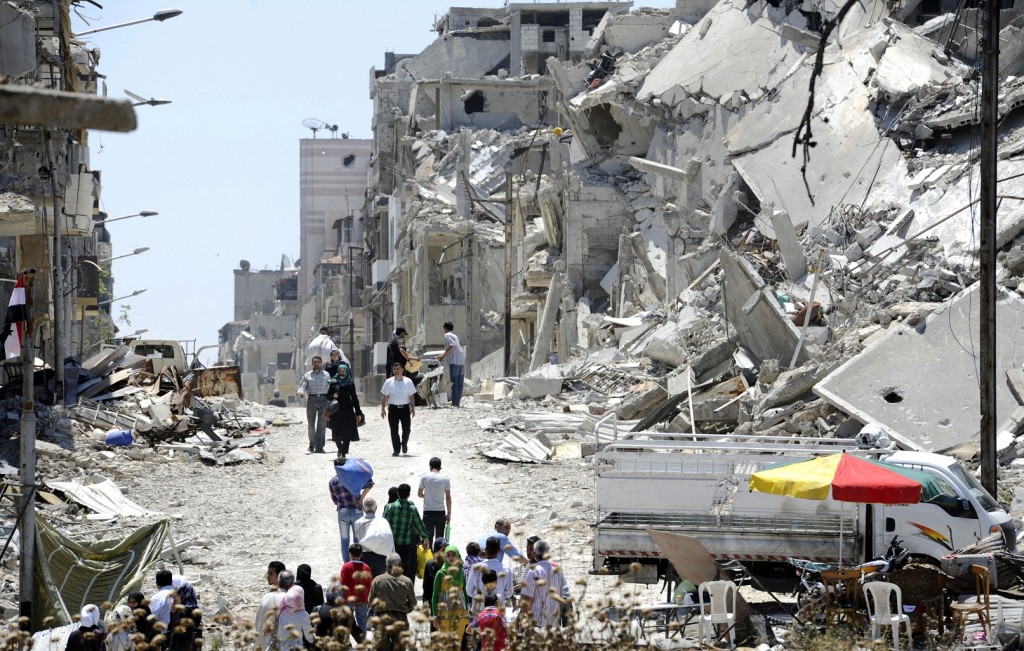 Residents pass by a checkpoint as they arrive to inspect their homes in the Wadi Al-Sayeh district at the al-Khalidiyeh area in Homs.

Christians and millions of other Syrian civilians have left the country to escape the ongoing civil war, which is being waged between the government of President Bashar al-Assad, various Islamic rebel groups trying to take out his regime, and the Islamic State terror organization, which joined the battle for control in 2014.

Audo revealed that only around 40,000 of the once 160,000-plus Christian community in the city of Aleppo remain, and they have had to deal with mass bombings and a variety of other hardships over the years.

“You cannot imagine the dangers that we face every day,” Audo said, according to AFP. He revealed that while wealthier Christians have been able to flee, “the middle classes have become poor and the poor have become miserable.”

While the administration of Assad has been blamed by the international community for carrying out human rights abuses in the conflict, along with all other parties involved, the bishop insisted that the Syrian government is not persecuting Christians. Audo estimates that, “80% of Christians would get behind Assad if he were to run for re-election.”

He said that Christians are being targeted by IS, which has beheaded or threatened with death countless believers, and is seeking to “destabilize the Syrian society and transform the war into a confessional war.”

Audo further said that Muslim and Christian communities lived side-by-side in peace in Syria before the civil war. “I think… this war is not coming from inside Syria… I think all is organized from outside to destroy Syria,” he added.

Audo said back in May 2015, “We are under bombs every day. I think many Christians will flee from Aleppo and seek shelter in the coastal area, but they will do it when schools and universities close, after the exams. In the disaster in which we live, even this year schools and universities remained open in the central districts of Aleppo,” Audo shared at the time.

“Many still believe that studying is important for the future although one lives in a city that seems to have no future,” he added.

A newly agreed upon ceasefire in March is still reportedly holding up in Syria, though Russian President Vladimir Putin surprised world leaders earlier this week when he revealed he would begin pulling troops out of the country.

“I consider the mission set for the defense ministry and the armed forces on the whole has been accomplished,” Putin said, adding that the decision was made “in accordance with the situation on the ground [in Syria].”

“I am therefore ordering the defense ministry to begin the withdrawal of the main part of our military force from the Syrian Arab Republic from tomorrow,” he added.

Russia had entered the conflict in September 2015 with the mission to push back against the advances of IS, carrying out air strike operations against terror targets.