Hidden Figures: Believing in What You Can’t See

The world wouldn’t believe that African-American women would be behind the math and engineering that launched John Glenn into space in the 1960s, but the world will hear their story thanks to Hidden Figures. With strong performances from Taraji P. Henson, Kevin Costner, Octavia Spencer, Janelle Monae, Jim Parsons, and Kirsten Dunst, Theodore Melfi (St. Vincent) tells a story with humor, passion, romance, and excitement that will delight audiences and challenge them to break barriers.

Real-life NASA mathematician Katherine Johnson (Henson) works hard with her two friends, Dorothy Vaughan (Spencer) and Mary Jackson (Monae), but they don’t get the respect they deserve, with marks against them as women and African-Americans. But when Al Harrison (Costner), director of the Space Task Group, realizes that his chief engineer, Paul Stafford (Parsons), doesn’t have the right team to beat the Russians into space, Johnson gets her chance to show how intelligent she is, negotiating a relationship with Mahershala Ali’s Jim Johnson as well. In the meantime, Vaughan proves that she has the right stuff to manage others, white or black, and run the newfangled IBM computers that the NASA dreams of using; elsewhere, Jackson argues about the right way to make the world a better place with her husband (Aldis Hodge) and pursues integration at an all-white school to get her graduate degrees to become an engineer.

The propulsion for the film is the Space Race with the Russians, as the (recently deceased) John Glenn (played here by Glen Powell) moves closer and closer to the Friendship 7 orbit around the Earth. This framework has a heavy math and engineering background to it that somehow, Melfi delivers with excitement and tension. Thanks to Allison Schroeder’s screenplay adaptation of Margot Lee Shetterly’s book of the same name, the audience will laugh (and cry) even as the tension grows. We care about angles and algebra, because we care about the people involved. We know they do succeed because it’s historical, but we want to see these three women rise above the things that hold them back. 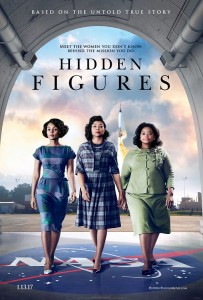 In a blink of an eye, the two hour film flies past. We watch the battle over segregated bathrooms (and coffepots), over education, over gender equality, over family-raising and single-parenting. We care because Henson, Spencer, and Monae deliver in award-winning ways, drawing from their humor and poignancy. While they are bantering over the times and how they should change, they’re also fighting through, figuring out how to take action at times and stay silent at others. They, and Hidden Figures as a whole, speak to the way the world worked in the 1960s and the way it still works now. To fail to see the parallels would make us undeserving of these women and their pioneer attitude.

One particular scene stands out as Henson’s Johnson stands up, finally, announcing that she must run a half-mile, in any weather, to the bathroom, and that her coffee and her pay are lacking compared to her white counterparts. While she and the audience have seen the sense of overcoming in the church scenes, and Johnson has been inspired by Harrison’s belief that to get to the moon one must see oneself as already there, this is the moment where her conviction must impact someone else’s for change to occur. This is powerful stuff, a reminder that faith in each other and what could be involves faith in something bigger than oneself.

This is math – “the numbers never lie” – but it is also faith – “it’s hard to believe in things we can’t see.” This is the story, told with great humor and conviction, of three courageous women, of a country founded on freedom and exploration that still seeks to find itself. This is the story of faith in the midst of persecution, of friendship, humor, and perseverance. This is a film about having the right stuff, and refusing to give up until you soar as high as you can. This is a film everyone should see to believe.