A conscientious objector in the Christmas wars

It’s Christmastime, the season for urgent cries from Christian groups who want to defend the holiday from the forces of secularism.

Typical is the press release I got from the American Family Association threatening a boycott of Old Navy, Gap, and Banana Republic because their holiday advertising wasn’t sufficiently Christmas-y. When Gap officials said they had advertisements in the works that were Christmas oriented, the AFA took credit and suspended the boycott.

“As a gesture of our ‘good will to men,’ we have decided to suspend our boycott of Gap and its divisions until we see the content of this new commercial,” said Bryan Fischer, the AFA’s director of issues analysis. “We firmly believe that Gap is responding to an enormous amount of pressure from the AFA network. We’re happy that they’re apparently keeping Christ and Christmas in the Christmas season.” 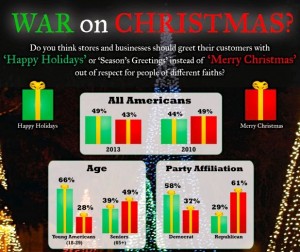 I consider myself a “fellow warrior” with some of these folk. By that I mean that we agree on many things, and I would normally join them in their “culture war” fights. But on this one, please allow me to offer a dissenting view to the prevailing “Jesus is the reason for the season” mentality.

First of all, Jesus is most certainly not the reason for the orgiastic spending spree modern Christmas has become. I certainly think anyone should be able to say “Merry Christmas” if he or she wants to. But given what this holiday has become, there’s a part of me—a big part of me—that wants to keep the Jesus I worship as far away from this commercial debauchery as possible.

Secondly, there are the words themselves. “Christmas” is derived from “Christ’s Mass,” an expression first recorded in the 11th century. “Holiday” is a word derived from “holy day,” an expression that likely has an even more ancient, and no less religious, derivation. Indeed, the phrase “Merry Christmas” was unknown until the 16th century, and it connoted the idea of a Christmas that was—shall we say—festive. In other words, “Merry Christmas” may have been a medieval euphemism for “bottoms-up.”

These historical associations may have been why the Puritans banned Christmas. In fact, it is ironic that many of the defenders of Christmas, who often venerate our Founding Fathers, forget that one of the deciding battles of the Revolutionary War took place when George Washington forced his troops across the Delaware River on Christmas night 1776. He attacked Hessian troops at Trenton, routing them in a battle that lasted only an hour. The myth spread that the Hessian troops were unprepared for the battle because they were drunk from their celebration of Christmas. It’s likely that this story is not strictly true, but it caught on because of the American and Puritan disdain for the celebration of Christmas.

My third reason for sitting out the Christmas wars is simply the overall shrillness of the conversation. Several years ago, Tampa pastor Paula White—who has since found herself under investigation by Sen. Charles Grassley and the Senate Finance Committee—initiated the “To Hell With Happy Holidays” campaign, an attempt to stamp out the phrase “Happy Holidays.” It seems ironic in the extreme that anyone would think it shows the love of Christ by saying “To hell with Happy Holidays.” But these are the depths to which many have fallen.

With all these reasons not to engage in the Christmas wars, why do Christian groups insist on this campaign year after year? I think the answer to that question may be, alas, crass commercialism. A 2006 story from the Religion News Service reported that the American Family Association sold more than 500,000 buttons and 125,000 bumper stickers bearing the slogan “Merry Christmas: It’s Worth Saving.” The Alliance Defense Fund sold about 20,000 “Christmas Packs” that same year. The packs, available for a suggested $29 donation, included a three-page legal memo and two lapel pins.

I’m not saying that there are times when we Christians shouldn’t stand up for our rights, but when we fire all our weapons in such a meaningless skirmish, we alienate potential allies, and we have no ammunition for the battles that matter.

Huge challenges face our culture and the Christian church: abortion, pornography, same-sex marriage. These are battles worth fighting, battles we must win, battles with too few warriors in the fight. And we’re wasting our time with “Merry Christmas vs. Happy Holidays”? Our priorities are badly out of whack.