A farmer-missionary keeps his hand to the plow in Siberia

(WNS)–In Russia, missionary Justus Walker is dubbed “The Merry Milkman,” an apt nickname for the bearded dairy farmer with an exuberant laugh.

Walker’s Russian adventure began at age 11. In 1994, heeding God’s call to missions, his parents sold their Idaho home, packed up their four kids and moved them across the globe to Siberia. They planned to serve for a few years before returning to life in Idaho. Early on, Walker decided he’d study computer engineering at a Christian university.

God had other plans. 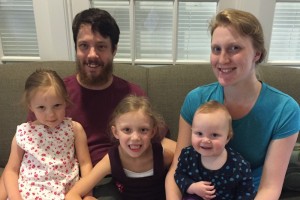 His family returned to the United States, but instead of heading to college, Walker felt led back to Siberia. He returned alone and worked four years in a recording studio, helping Russian musicians produce original Christian hymns.

He met his future wife, Rebecca, during a visit home. Returning to Siberia, they planted several churches. They now live with their three young daughters 2,900 miles east of Moscow in the rural village of Takuchet, Siberia.

Walker works another job in each place they live because there aren’t enough people in one village to support a full-time pastor. Working in a trade provides income and allows them to befriend the locals, which opens doors to share the gospel.

Eventually they realized if they recruited urban Russian Christians to duplicate their bi-vocational model in other rural towns, the gospel could be shared more efficiently.

Facing numerous challenges through the years, they chose to trust God. Arsonists twice set fire to their home, and once someone killed all their goats. “It’s about remaining focused on Christ. Thankfulness produces contentment, contentment produces joy, and the joy of the Lord is our strength,” Walker said.

Most disappointing, though, was the difficulty of getting Russian Christians to come train with them. They grew discouraged and, after 10 years of struggling, were tempted to give up.

In 2014, due to tensions between Russia and the West, the European Union and the U.S. placed sanctions on Russian banking, and Russia retaliated with its own import-export restrictions on agricultural products, forcing them to depend more on their own country’s agricultural resources.

A local Russian television station contacted Walker to get his perspective as an American farmer working in Siberia. That interview eventually led to another with Russian national media.

Asked if the sanctions were going to help Russian farmers in the long run, Walker emphatically said no.  The reporter pressed, but Walker insisted that Russia should not be isolated and needs to stay competitive with the West.

During the interview, Walker told a story about how he dealt with cheese snobs when he sold his cheese in the city market: “They would ask, ‘Why should we buy your Takuchet mozzarella instead of Italian mozzarella?’ Well, they can’t buy Italian mozzarella, now can they?”

That one snippet taken out of context made him sound pro-Russian establishment. It went viral with 3 million hits on YouTube.

“All of a sudden, we went from feeling so isolated to being nationally renowned,” Walker said. “It goes to show that God can use even the corrupt media.”

As a result of the video, Walker gained his nickname and major exposure. People began contacting him for advice for starting their own ministries. In a year and a half, the Walkers’ farming model stimulated 14 church plants in remote villages.

They offer one-year internships on their farm, and Walker does consultations by phone and on location.  He’s also busy doing conferences about once a month. He travels to larger cities with a three-fold presentation about how to share the gospel, the value of home education, and farming techniques.

The Walkers’ next goal is to move to a new town to plant a new church and start a new farm. This time, they want to add soap-making to their farm model, using their own goat’s milk.

“God is faithful to do the work He’s called you to do,” Walker said. “Just keep your hand on the plow.”