A Light in the Darkness

It appears every month I write to you, things seem worse. COVID is still out there and being manipulated by powerful political forces in government and their collaborators in the press. Hyper-violent and lawless anarchists Black Lives Matter (BLM) and ANTIFA continue to exploit the protest movement sparked by the killing of George Floyd, seizing every opportunity to throw gasoline on the already raging fires of civil unrest in hopes of furthering their stated goals of defunding law enforcement and toppling this free republic. And all against the backdrop of DOJ investigations of the greatest political scandal this country has ever experienced. I’d have to say that it’s difficult to even turn on the “news” these days.

Nevertheless, we Christians, in the face of growing vitriol and persecution, continue to hold fast to the truth of God’s Word, and the promise of Jesus Christ that He is on the thrown. This knowledge and reassurance is what carries us through difficult times. And that for all the chaos and strife we are witnessing/experiencing, courtesy of a media and press devoured by the evil one, there is the hope of Christ who loves us, and desires that not one should perish but for they call out to Him and be saved.

To that end, I spoke with the owner of “Lori’s Little Lambs Christian Daycare Center” in Pawtucket by phone recently. Lori-Ann Colacone understands very clearly, that overcoming challenges means surrendering to His will, thus clearing the path for a revival of one’s own faith first.

Broken, in pain and a victim of sexual abuse in her youth, Lori woke one evening to what she described as an “audible” voice commanding her to share her turmoil with the Lord. She took this as a “Divine appointment with Christ” and opened her soul to Him in what she described as a very long, sleepless, difficult, and brutally honest night. “Jesus met me where I was, as a sinner”, she explained. “He wanted me to tell Him my story, so I did, no holding back”. She told me she was eventually jolted out of her candid talk with Christ by a phone call from an in-law who spoke to her of faith and worship. Lori immediately took this as a sign that her life was most certainly going in another direction. However, she also told me that nothing really changed at that point, and I remembered my own “awakening” as similar.

She explained that what was different however, was an “unquenchable thirst for all things Jesus”, and I concurred. That change comes slowly, and with faith and knowledge of the truth. It is a powerful reckoning you cannot ignore and that I still can’t quite verbalize today. Lori told me she basically shut herself away for an entire year, living, breathing and searching for all things Jesus. That was 22 years ago, and I realized very quickly during our conversation, that I was talking to another one of those special folks who God had given His marching orders to, another person who knows the truth and who can see beyond the nightly news to the necessity of God in the solution(s) to what ails our nation and our world.

Lori talked with me about the Jesus learning process and how her eventual desire to work with God’s little ones came to be. She told me of looking out the window one evening and watching a young boy, no more than 10 or 11 years old become enraged as he crossed the street w/o care and was very nearly struck by a vehicle driven by an older woman. The young boy pounded on the hood with an anger that Lori knew was a byproduct of his upbringing and a spiritual void in his life. It was then and there that she understood what the problem really was and what she needed to do about it. Within three years “Lori’s Little Lambs” Christian Daycare Center would become a reality. That was 16 years ago. 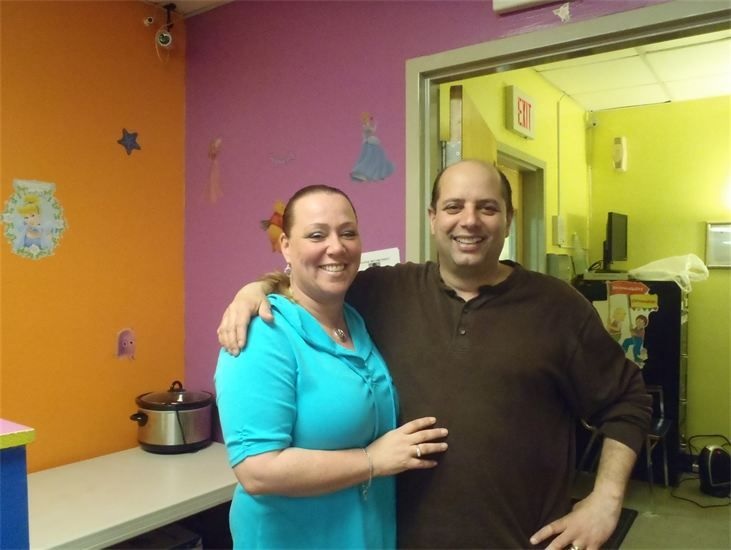 Their mission statement says it all and speaks Lori’s heart:

“We believe that each child is equal in the sight of God and is to be treated as an equal regardless of sex, race, color, religious beliefs or political background of their parents.

“We believe that an environment must be provided to introduce and enhance a child’s spiritual development. This will be done through saying grace, using Bible Stories, Christian Books, Songs & Spiritual Activities.

“The Staff, when relating to each other, parents or children will exemplify Christian values relating to love, kindness, patience, caring, co-operation, sharing and respect. This will be presented as appropriate lifestyles to the children through role modeling by the staff”.

As with all things He brings to our tables, there are twists and turns and roundabouts. There are successes and failures, experiments and tests which eventually craft His will for us. And there are times when He even adds to our (Christian portfolio) if you will. Through the years Lori told me, she developed a core group of friends, consisting of co-workers, business associates, and just believers who shared a desire for the Gospel. They meet on Tuesday evenings, worshiping and praying. Recently they began discussing the basic truth of the Gospel and what it really means to serve the Lord. In the end, prayer brought them to the realization that the wonderful “Good News” they felt in their own hearts was meant to be shared with whomever would hear it. 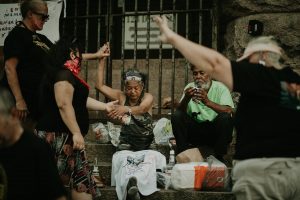 Mathew 28: 18-20 18 Then Jesus came to them and said, “All authority in heaven and on earth has been given to me. 19 Therefore go and make disciples of all nations, baptizing them in the name of the Father and of the Son and of the Holy Spirit, 20 and teaching them to obey everything I have commanded you.

So they set about discussing how they might go about doing the work of the Great Commission. And in the midst of COVID-19, which has been so brutal to the most vulnerable among us in nursing homes and congregate care facilities, who better to bring a message of hope too, than those secluded away and separated for the ones they love. Lori made it official. They would go, worship and bring the message of the “Upper Room” to the folks in Oak Hill Nursing Home in Pawtucket and Golden Crest in North Providence, Rhode Island. 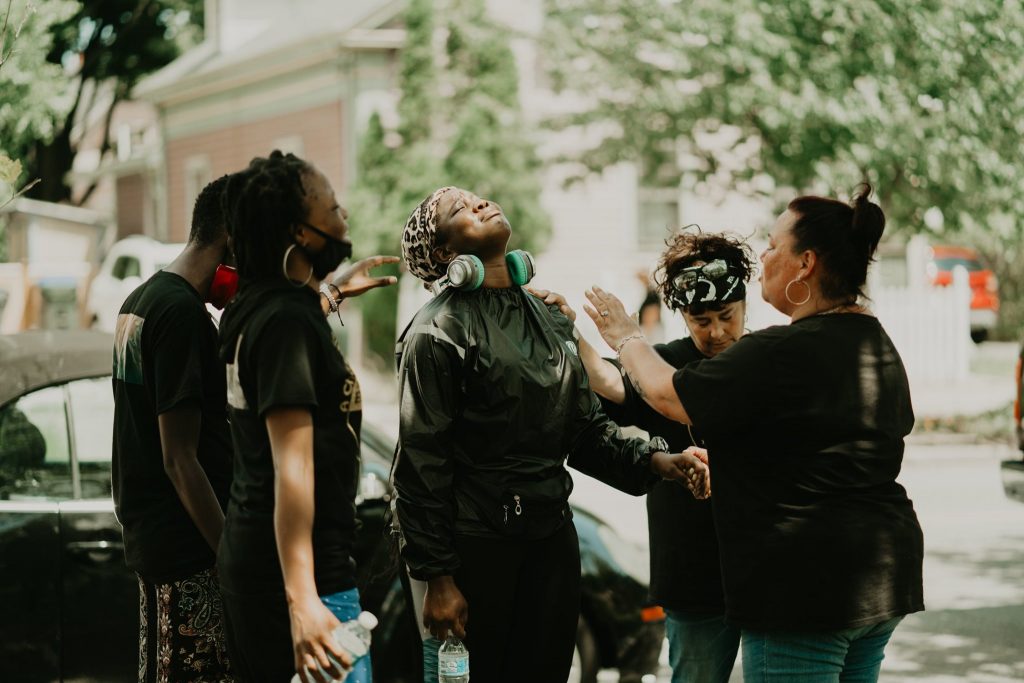 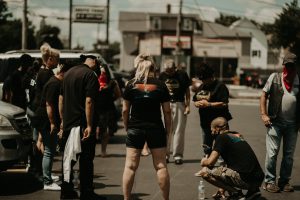 Lori described emotional but extremely well received events where seniors were in the windows singing along with worship songs and showing their appreciation for an uplifting albeit distant message. One of the managers even came out to greet the worshipers in tears, thanking the group for raising the spirits of so many inside who so desperately needed it. When I asked Lori to explain her motivations in more detail, she simply told me, “It’s where the rubber meets the road, you know? It’s asking yourself, will I just talk, or will I walk? Will I do this”?! Lori was systematically pushing all of my emotional buttons, as I’ve written much of the politics of this “pandemic”, and how it has disproportionately affected our elderly and most vulnerable by way of the ignorance of our leaders on Smith Hill. And also how we must take care to raise up Godly and morally grounded children, lest we forfeit their future to the evil one.

With the success of those events, the group wanted to do more. No expectations, just God leading them to the town square if you will, and letting folks hear the Word. But what of a name for their collective effort. Lori told me, the “Upper Room Experience” made perfect sense as the Holy Spirit was clearly moving them. And she added, “The Sounds of Tekoa”, “PREPARE, for the King is coming, sound the trumpet”. This past Saturday the 19th of July, the group, along with volunteers from MNP Church in Pawtucket, set out for Dexter Park in Providence, behind the Armory, not knowing what to expect. In the end, what did happen, was folks heard the beautiful music lifted up to the Lord and they were moved by the love of Jesus. Some were even saved. From the homeless to the addicted in the streets, to anyone who could and would hear the message was/is the same. God loves you and will meet you where you are.

Lori and I talked about our destinies and how being saved changes one’s priorities. Lori’s humble tone and desire not to draw the spotlight, but rather emphasize the love of our Savior out in front of every effort she makes, convinced me all the more that God is moving her to do even greater things. We both agreed however, that if even one life were changed or just one person came to Christ during one of the groups outings, then Lori will have fulfilled God’s will for her that day. 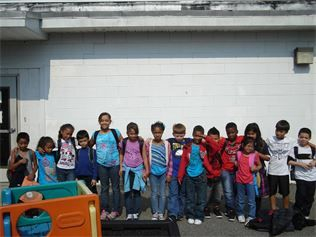 I finished up my conversation with the woman who ran the little Christian day care I’d heard so much about and asked her about her future plans. Once again, a very humble and introspective Lori told me that would be for God to decide. Clearly she and her group of like-minded messengers had cleared a path for Christ into the lives of those in Dexter Park, and they’d absolutely touched the hearts of those behind the windows of those nursing homes. But Lori feels strongly that she must pray and listen to God first regarding where the group goes from here.

So, as I look at the world this August 2020 I can only pray that “Lori’s Little Lambs” will take what they’ve learned at that daycare to the next phase of their lives. And that the next generation Lori-Ann Colacone has touched will eventually be the rock on which revival will stand and a return to Godly ways will commence. Moreover, I pray Lori continues to reach out to the lost of the city, and anyone else who needs to hear songs of worship and the message of the “Upper Room Experience”, so they may know and understand the love of the God who made them. And that for all the chaos and violence we’re seeing on the streets in cities across this country, there will be more like her, who know that only when men’s hearts are changed will men be changed.

Stay safe and cool my friends…

You can check out Lori and company’s efforts on their Facebook page, The Upper Room Experience, The Sound Of Tekoa.