A NEW YEAR AND NEW HOPE FOR MASSACHUSETTS

And So It Begins… 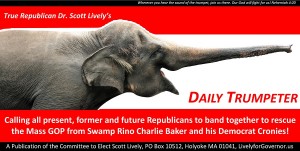 The battle to reclaim the Republican Party from the Charlie Baker RINOs, and to restore moral and fiscal sanity to the Commonwealth of Massachusetts, begins today.   It begins with my pledge of allegiance to the founding principles of our constitutional republic and of our own state constitution, which Preamble invokes our citizens’ “natural rights, and the blessings of life” which emanate from the “goodness of the great Legislator of the universe.”

Yes, that is the actual language of our most important and binding legal foundation, which I can assure you as a constitutional lawyer, was intended to conform all subsequent law and policy to its logical and philosophical premise forever.

Yet, how many years have we suffered the humiliation of watching our natural rights — life, liberty and property — being subjugated to atheistic liberalism and the culture of death in direct contradiction to our constitution?  — ruler after ruler from both parties perpetuating the same elitist cronyism, justifying the mass murder of the unborn while they mortgage the surviving childrens’ future and enslave countless thousands of inner city families to government dependency in ever-expanding “entitlement programs” so they can skim the cream flowing from the federal and state treasuries into the pockets of their co-conspirators in government and the private sector.

Only a return to those natural rights and the limited delegated powers intended by the founders will right the wrongs we have suffered and (if we do nothing). will continue to suffer at the hands of corrupt men like Charlie Baker — unclean hands, stained red with the blood of the unborn, and busy with the task of waging war against the very conservative core of the Republican Party who held their noses to vote for him in the last election.

And even though Republicans voted him in, Baker has sided with the Democrats against them on the most important issues of our day: taking no action to end the outrageous travesty of “sanctuary cities,” fully endorsing the destructive LGBT agenda and signing the normalization of transgenderism into law, turning traitor on 2nd Amendment issues, disrespecting and distancing himself from President Trump, perpetuating and expanding the opioid addiction epidemic and methadone “cure” scam, and of course, promising the most prolific baby-killing organization in the country, Planned Parenthood, that he would replace from our state tax dollars any money they lost due to congressional punishment of their grotesque traffic in fetal organ harvesting.

Enough is enough!  Conservatives now have a solid, proven conservative to replace Charlie Baker.  I am attorney and pastor Dr. Scott Lively and I am running to rebuild the party and restore this commonwealth.

Join our prayer team. Host a meeting at your home or local community group, or invite Pastor Lively to speak in your church– send us an email at votelively@gmail.com

The Daily Trumpeter is published and archived at VoteLively.com