A Solution for the Same-Sex Marriage Problem 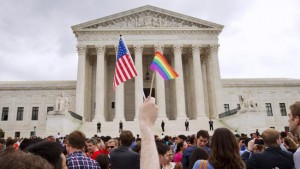 To be sure, the SCOTUS decision to legalize same-sex “marriage” was the result of decades of relentless propaganda from the national news media, liberal politicians, and college professors throughout America.

In other words, just as in the Roe v. Wade decision legalizing abortion-on-demand, the Obergefell decision legalizing same-sex “marriage” was judicial activism pure and simple. There were no precedents for either decision. Think of the brilliant minds in law, philosophy, and religion over two thousand years of Western Civilization that somehow missed the “right” of homosexuals to “marry.”

What I’m saying is, I realize that militant homosexuals, ultra-leftists, and judicial activists have been waging war on America’s historic Christian values for decades–and they won a huge victory with the Obergefell decision. I also understand that these people will never be satisfied until they have totally and thoroughly expunged these values from America’s public life. There is no question they will resort to any tactic–no matter how morally unjust or constitutionally corrupt–to achieve their radical, amoral agenda. Kim Davis will not be the last Christian to be persecuted for her faith in this country.

That said, the Obergefell decision has successfully divided the liberty movement almost in half, between those who agree with the decision (on whatever grounds) and those who disagree. But, instead of arguing over the SCOTUS decision, here is what ALL OF US in the liberty movement should be doing: we should be using whatever influence we have to promote the idea of taking marriage OUT OF THE HANDS OF THE STATE ALTOGETHER.

Most of us realize that marriage is sacred; that it’s much more than just a civil contract. (Only the state itself reinvented marriage as being merely a civil contract.) One doesn’t have to be a Christian to acknowledge this distinction. Throughout the history of Western Civilization, the state seldom had authority over marriage. Think of it: for over 1,800 years of Western Civilization, the state had little–if anything–to do with marriage. (In America, only the colony of Massachusetts is recorded as requiring state marriage licenses before the mid-nineteenth century.)

So, why do we even look to the state for a license to marry? The fact is, WE SHOULDN’T. All of the bickering over Obergefell only serves to ensconce the notion that the state has legitimate authority over marriage. IT DOESN’T.

For example, the State of Pennsylvania didn’t outlaw Common Law marriage until 2005. And the only reason the vast majority of states do not recognize Common Law marriage today is because the Church has completely surrendered the Scriptural teaching on the subject and has willingly (even happily) turned what is uniquely a divine institution over to the state. 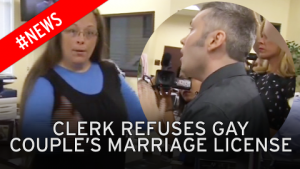 In other words, ladies and gentlemen, the only one to blame for the decision of the Supreme Court to legalize same-sex marriage is THE CHURCH. The ultra-leftists and militant homosexuals would have had NO CHANCE of achieving victory at the Supreme Court had the churches of America been doing their job over the last half-century or more to educate people on the historic Natural Law principles governing marriage and the state. (Virtually ALL of the major problems we are dealing with today are the result of the absence of sound instruction from the pulpits of America.)

But since the Church’s surrender of the sanctity of marriage, here is the current reality: 40 states do not legally recognize Common Law marriage. That means, those 40 states see only the state as having authority over marriage. But the state has NO AUTHORITY over marriage and cannot legally sanction ANY marriage. I remind you Jesus said, “What therefore God hath joined together . . . .” Only GOD can join couples in marriage.

So, including Utah, the people in ten states are free to marry WITHOUT a State license. And that’s exactly what every freedomist in those states should start promoting–and promoting LOUDLY. And freedomists in the other 40 states should start demanding that their State legislatures once again recognize Common Law marriage. Maybe people in those states should even consider civil disobedience and marry outside the licensing authority of the State. After all, if God has joined a man and woman together, what difference does it make if the State–or anyone else–recognizes it or not? If enough pastors and churches would do this, it wouldn’t take long for State legislatures to enact appropriate legislation.

Let the state recognize or not recognize to its heart’s content; let it embrace all of the perversion it wants. You can bet polygamy will be legalized next. And then what? Pedophilia? Bestiality? At some point, the sacred institutions of marriage and the Church will be forced to separate themselves from a suicidal society just as they did when the Roman Empire was collapsing. In Rome–as in oppressed nations today–Christians and churches mostly took their worship and sacred ceremonies underground. And, if history teaches anything, it teaches us that no civilization has long survived after socially embracing aberrant sexual behaviors. And America won’t either.

Let’s face it: the federal government in D.C. is leading America over an economic, political, moral, and cultural cliff. So, why do we keep looking to D.C. to fix the problem? THEY WON’T DO IT. As Ronald Reagan famously said, “Government is not the solution to our problem; government IS the problem.” 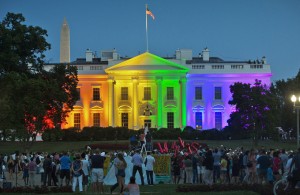 How in the name of common sense can pastors and churches take a Scriptural stand on the sanctity of marriage when they have allowed the Church itself to be bastardized by accepting the 501c3 tax-exempt organization status from Washington, D.C., and incorporation status from the states?

Think of it: our spiritual “leaders” have allowed the two most sacred institutions on earth (marriage and the Church) to be prostituted on the altar of state recognition. Think of it another way: our 501c3 pastors have become little more than pimps for the IRS and, now, a radical, activist Supreme Court. Do pastors really want Caesar’s blessing that badly?

Regarding marriage: we should marry under Natural Law (Common Law) ONLY.

Regarding the Church: it should be removed from 501c3 non-profit organization and State incorporation status–and if the pastor and church refuse to extract themselves, we should extract ourselves from THEM.

We either “come out” from this leviathan or we will be swallowed by it.

Yes, the radical left and militant homosexuals will continue to press their anti-Christian agenda with every means possible. Yes, those of us who have Christian, traditional and moralist convictions are going to be forced to defend these historic principles tooth and nail. But there can be no victory whatsoever by willfully surrendering the Natural Law principles upon which our convictions are predicated. Neither can there be victory by pretending that Caesar’s law is Supreme Law, because it’s not! There is a Court above the court. There is a King above kings. There is a Law above law.

Our founders gave their lives in order to bequeath to us a country in which we didn’t have to decide between obeying God and obeying government, as this constitutional republic was designed to protect our duty to God. Current national leaders–facilitated by America’s spiritual leaders–are taking that wonderful bequeathment away from us.

Therefore, say it anyway you want, “Don’t tread on me,” or “We must obey God rather than men,” but say it we must. And if Christian men and women cannot say it in defense of the sanctity and autonomy of marriage and the Church, they cannot say it at all.