There’s been a lot of talk recently about Tom Brady and his 4-game suspension, which was linked to him destroying his phone that contained 10,000 text messages that many believe would have proven him guilty of deflating footballs, etc, etc…

Why is this all such a big deal?  I think it’s because we (fans) put our heroes on a pedestal, which in the end makes them less fallen than the rest of us.  But why is this a dangerous thing to do? Because Tom Brady is just as human as you and me.  And I’ve said this many times before:

I’ve met way too many people who have let me all the way in to know that there could be someone else who is not like the rest of us; namely, broken and in desperate need of the Savior. 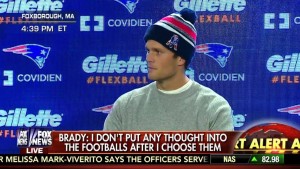 Nobody really knows what happened.  Maybe he is telling the truth, maybe he’s lying. Either case, what I know to be true is Tom Brady is a fallen man in need of Jesus the Savior.  If he was guilty, it wouldn’t surprise me because the Bible already tells me he is fallen…like the rest of us.  If he is innocent of deflating balls, then he is still fallen because he is born in Sin…like the rest of us.

And this can be seen in the Church as well.  Christians are some of the hardest people to reach and teach; namely, because most of them think the message/gospel is for EVERYONE else but themselves.  “That was a great message pastor! My cousin Vinny really needs to hear this!”  or “Man! I wish my wife was here, she really needs to hear that message on forgiveness…”  blah blah blah.  Nobody is owning what God is trying to say to them because they are too concerned with everyone else.  It’s maddening.

So, give Tom Brady some grace and ask yourself, what are you hiding. Why are you so happy that Tom Brady is in the spotlight and you and your secret is still in the dark?  Expose that lie today!  Be free in Christ to tell the world (or your family and friends) who you really are.  Tell your wife the thoughts that ran through your mind today.  THAT is freedom in Christ. To know and act like you need the Savior.