(WNS)–The abortion rate in the United States has declined to its lowest point since abortion’s legalization in 1973, according to an annual report released by the Centers for Disease Control and Prevention (CDC). 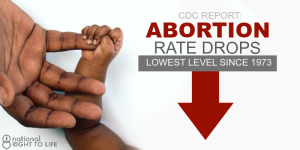 The cause for the decline may come from multiple sources. CDC partly credits contraceptive availability because most abortions stem from unplanned pregnancies. “Because unintended pregnancies are rare among women who use the most effective methods of contraception, increasing access to and use of these methods can help further reduce the number of abortions performed in the United States,” the report states.

David Frum, senior editor at The Atlantic, identifies two social trends leading to abortion’s decline. First, the pro-life movement has successfully increased the number of people who view abortion as morally wrong: 51 percent say it’s wrong while only 38 percent view it as morally acceptable, according to a 2012 Gallup poll.

Second, single motherhood has become more socially acceptable than in previous decades, according to Frum. Before 1965, society approved of shotgun weddings and adoption over abortion and single motherhood in response to out-of-wedlock pregnancies. But between 1975 and 1990, following abortion’s legalization and the sexual revolution, single motherhood and abortion became more acceptable.

But the majority of abortions still involve unmarried women (85.5 percent) and women age 29 and younger (71.1 percent). Abortions for unmarried women have remained above 80 percent since 1996, Randall O’Bannon, director of education and research for National Right to Life, wrote for NRL News Today. Teen abortions have declined from 29.2 percent of total abortions in 1980 to 13.9 percent in 2011.

“This data serves as an indicator that we may need to invest the same level of effort to reach the young, single mom struggling to make ends meet as we did the high school teenager afraid to tell mom or dad she might be pregnant,” O’Bannon said.

The report also revealed the abortion rate remains higher among black and Hispanic Americans than among white Americans. The abortion rate among white women is 7.8 for every 1,000 births, compared to 16.1 for Hispanic women and 25.8 for black women. In response, O’Bannon called for more pro-life outreach to Hispanic and black communities “given the disproportionate number of abortions.”

“Faced with the grisly reality of abortion, the gruesome truth about America’s abortionists, and … the knowledge that there are practical, realistic alternatives to abortion that are better for both them and their babies, more women are choosing life,” he said.