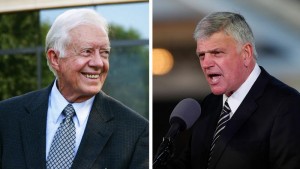 In a short video clip of an interview published to the news website HuffPost Live Sunday and picked up by Breitbart.com, Carter spoke about his religious faith. He said as a politician he never ran across “any really serious conflicts between my political obligations and my religious faith.”

When asked about gay marriage, the 39th president said, “That’s no problem with me. I think everybody should have a right to get married regardless of their sex.”

Carter told the interviewer that the “only thing he would draw a line on is … I wouldn’t be in favor of the government being able to force a local church to perform gay marriages if they didn’t want to.”

The former president was then asked, “Would Jesus approve of gay marriage?”

“I believe He would. I don’t have any verse in Scripture,” Carter replied. “I believe that Jesus would approve of gay marriage that’s just my own personal belief. I think Jesus would promote any love affair if it was honest or sincere and was not damaging to anyone else. And I don’t see that gay marriage damages anyone else.”

In a post to his Facebook page Tuesday, Graham responded to the former president, saying he would “respectfully disagree with him on this one.”

“He is absolutely wrong when he said Jesus would approve of gay marriage. Jesus didn’t come to promote sin, He came to save us from sin,” Graham wrote. “The Bible is very clear. God destroyed the cities of Sodom and Gomorrah because of homosexuality. God defines sin in His Word—it’s not up to our opinion, the latest poll, or a popular vote.”

“What is very troubling is that some people may read what President Carter has said and believe it, whether it was this week or from a video 3 years ago that is now recirculating. God loves us and gives us the truth in His Word. He warns us of the serious consequences of sin,” the evangelist noted.

Graham concluded his post with a Bible verse from the New Testament book of Romans which describes homosexuality that was clearly visible to the Apostle Paul and the early church in the 1st century.

“Therefore God also gave them up to uncleanness, in the lusts of their hearts, to dishonor their bodies among themselves, who exchanged the truth of God for the lie and worshiped and served the creature rather than the Creator, who is blessed forever. Amen. For this reason, God gave them up to vile passions. For even their women exchanged the natural use for what is against nature. Likewise also the men, leaving the natural use of the woman, burned in their lust for one another, men with men committing what is shameful, and receiving in themselves the penalty of their error which was due.” (Romans 1:24-27).