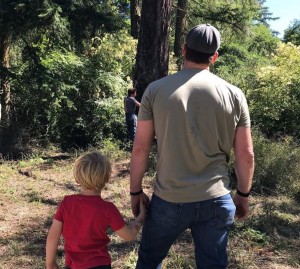 Amid all the self-aggrandizement of celebrity Instagram accounts, a few gems lie within the sprawling social media matrix. One of these treasures comes in the form of actor Chris Pratt. The guy is pretty unique. While other celebrities pout and drape themselves in $50,000 dresses and shoes, Pratt can be found in jeans and a teeshirt, cutting up trees with his boy – an example to us all!

In his recent Instagram posts, Pratt can be seen hanging out with his son, away from all the glitz, glamor and noise of Hollywood.

“Mother Nature struck her down,” Pratt wrote, pictured alongside a freshly fallen tree at his farm. “Now this first generation Douglas Fir will be made into beloved pieces of art, mantles and a table from which my family will enjoy moments and meals for, God willing, many generations. I live for moments like these.

Pratt recently revealed to Parade magazine that he is taking some much-needed time off – a six-month break from acting in order to spend some quality time with his family.

“I’ve been on the road for 14 months – I did three movies back to back to back – so I’m taking six months off,” he told the magazine. “I’m taking Jack to Jack’s Beach – which is what we named the little stretch of beach on an island up on the San Juan Islands where we got a place. We’re going to go back to the fort we built about a month and a half ago when we went for a short visit and see if that’s still there. If not, we’re going to build it again.”

Seems like Pratt has got his priorities in order and is seeking to raise his boy right, living the simple farm life.