(Christian Post) – In response to ABC’s cancellation of its No. 3 hit show “Last Man Standing,” former Gov. of Arkansas Mike Huckabee has said he suspects that a “liberal social agenda” could have played a part, while actor Tim Allen said he was “stunned” by the unexpected news.
“There’s a lot of grumbling in conservative circles this week about ABC cancelling Tim Allen’s sitcom, ‘Last Man Standing.’ That’s understandable: it’s just about the only show in prime time that presents a conservative point of view without attacking it and makes fun of PC liberals,” Huckabee wrote on his website on Tuesday. 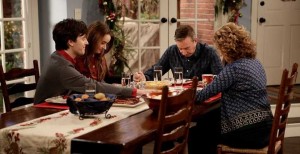 The ordained Southern Baptist minister, who is a supporter of President Donald Trump, added that despite the show’s ratings success, its conservative values likely didn’t sit well with Disney, the left-leaning corporate owner of ABC.

Huckabee said that some fans believe Disney is “punishing Allen for attending Trump’s inauguration and speaking out against rigid leftwing Hollywood group-think.”

At the same time, he noted that ABC is not getting syndication fees from new episodes to cover production costs, which could be a legitimate reason for letting it go after six seasons.

“Still, you’d have to be from another planet to think the networks haven’t used their programming decisions to try to push a liberal social agenda onto viewers who just want entertainment,” Huckabee continued.
“For instance, they seem to believe there are as many gay, lesbian and transgender people for real as you’d think there were from all the media attention they get.”

Responding to the news of the cancellation, Allen wrote on Twitter on Tuesday: “Stunned and blindsided by the network I called home for the last six years.”

ABC Entertainment President Channing Dungey told reporters on Tuesday that economics was the main reason for the cancellation.

“A large part of these jobs are managing failure, and we have made the tough calls and canceled shows that we would otherwise love to stay on the air. That’s the job. I canceled ‘Last Man Standing’ for the same business and scheduling reasons that I canceled ‘Dr. Ken,’ ‘The Real O’Neals,’ ‘The Catch’ and ‘American Crime.'”

Dungey added: “‘Last Man Standing’ was a challenging one for me because it was a steady performer in the ratings, but once we made the decision not to continue with comedies on Fridays, that was where we landed.”

That explanation has not stopped a major petition to save the show on Change.org which has over 300,000 signatures as of May 20th.

The text of the petition points out that “Last Man Standing” was unique, because it was one of the very few shows to portray conservative values in a positive light.

“‘Last Man Standing’ was not just selling conservative ideals though, as some of the characters in the show are clearly of the liberal persuasion, yet the characters on the show all manage to get along and take care of one another, despite their politically opposed views,” the petition states.

“The show is about more than politics though, it is about family. In fact, politics is only a secondary part of the show, but one in which many Americans can readily identify,” it added.

The petition urged fans to stand up to liberal ideals being “shoved down the throats of viewers,” and urged them to boycott all ABC programming until the network reverses its decision and reinstates “Last Man Standing” to its lineup.