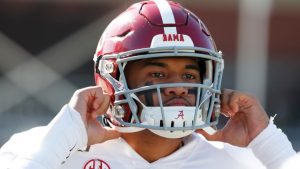 (SportsSpectrum) His college career may be over, but Alabama quarterback Tua Tagovailoa is expected to make a full recovery from a dislocated right hip he suffered in a recent game against Mississippi State. He underwent successful surgery on the following Monday morning in Houston.

“Tua’s prognosis is excellent, and we expect him to make a full recovery,” Alabama orthopedic surgeon Dr. Lyle Cain said in a statement. “He will return to Tuscaloosa in the next several days to begin his rehab.”

Tagovailoa was injured with three minutes left in the second quarter when he was tackled by two Mississippi State defenders. He was carted off the field and eventually airlifted back to Birmingham for scans. Tagovailoa also received a concussion and broken nose on the play.

ESPN reports that Tagovailoa will be on “a partial weight bearing recovery plan for six weeks and will be rehabbing daily in Tuscaloosa. In three months he will be able to begin athletic activity again, and by the spring should be ready to begin throwing.” The 21-year-old junior, who finished second in the Heisman voting last year, is expected to be a top-10 pick in the 2020 NFL Draft.

It’s a big blow to No. 5 Alabama (9-1), which is once again in the national title hunt — not only because of what Tagovailoa can do on the field (2,840 passing yards, 33 TDs, 3 INTs this season), but because of what he brings to the team elsewhere.

Saban later said, “I can think back to four or five players that I actually truly could say that I really love those guys as people, [and for] the way they did things, their contributions and how they effected other people. Tua would be one of those four or five guys.”

Soon after learning he’d miss the rest of the season and that he may have played his last college game, Tagovailoa thanked his fans for their prayers and said, “God always has a plan.”

Tagovailoa’s faith has long been at the forefront of who he is. “All glory goes to God,” Tagovailoa shared on ESPN after winning the national championship two seasons ago. “I can’t describe what He’s done for my family. Who would have ever thought I would ever be here right now in this moment? I thank God for that and I thank my teammates and Coach Saban for the opportunity.”

“For me, my foundation is my faith and my family,” Tagovailoa recently told CBN News. “You know, my faith is what keeps me motivated when I can’t even stay motivated myself. I’m just trying to play football, just trying to be able to take care of my family and be able to use my platform for the right reasons.”