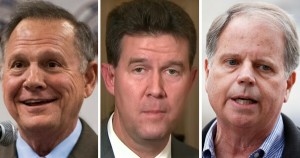 Alabama Secretary of State John Merrill announced on Monday he was launching an investigation into potential voter fraud in the Alabama U.S. Senate special election, which took place last week.

Democrat Doug Jones won the election taking 49.9 percent of the vote to Republican Judge Roy Moore’s 48.4 percent, with approximately 20,700 votes separating the two, according to The New York Times.

Merrill explained to WALA that his office will be investigating statements made by a Doug Jones supporter at the candidate’s election night party. The unidentified man said that he and others came from around the country to vote for the Democrat.

WALA reporter Kati Weis asked him, “Why are you excited to see this victory?” He responded, “Because, we came here all the way from different parts of the country as part of our fellowship, and all of us pitched in to vote and canvas together, and we got our boy elected!”

Merrill was asked about the man’s statement. “Well, it’s very disconcerting when someone who’s not from Alabama says that they participated in our election, so now it’s incumbent upon us to try to identify this young man, to see what kind of role he played, if it was to simply play a canvassing roll, or if he was part of a process that went out and tried to register voters, or if he himself actually became a registered voter,” Merrill replied.

“We don’t have any evidence of people doing that, our numbers do not indicate that has happened, but when you have someone actually recorded on television saying that they voted, and that’s what he said, then we’ve got to get to the bottom of that,” the secretary of state added.

The Moore campaign has sent out multiple appeals over the last few days seeking contributions to investigate the allegations of voter fraud.

In a Tuesday email, Moore stated, “Our program to ensure the integrity of this election is up and running.” “We’re already receiving reports of potential voter fraud and other irregularities from voters all across Alabama,” he said.

As reported by The Western Journal, Moore has not conceded the race to Jones yet.

In a video statement last week, the judge noted thousands of ballots including overseas military personnel and provisional ballots were yet to be counted.

Merrill’s office released the number of those ballots on Wednesday. WHNT reported 366 ballots from overseas had been received and 2,888 of the 4,967 provisional ballots cast were verified and will be counted.

The Moore campaign can pay for a recount, which it would likely seek to do if evidence were found of significant voter fraud.

Merrill has indicated the election results will not be certified any earlier than Dec. 26 or later than Jan. 3.