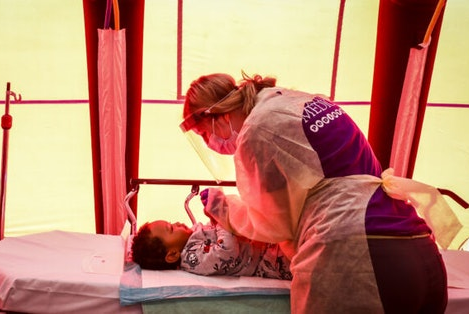 (The Dossier) – It appears that the United States just became the only country in the world to “vaccinate” babies and toddlers with COVID injections.

Despite what you are reading in the press, the U.S. seems to be, as of Friday, the only country in the world to partake in experimental COVID therapeutics for infants.

On June 16th, the FDA authorized mRNA COVID shots (both Pfizer and Moderna) under emergency use authorization for children under 5 years old, all the way down to 6 months of age. As you’ll see in a moment, this is unprecedented anywhere in the world.

The approval made its way through the halls of the federal bureaucracy, regardless of any studies showing a positive benefit for injecting young children with mRNA shots, which, even in adults, do not effectively prevent coronavirus infection.

Making matters worse, our deceitful corporate press is actively engaged in a cover up operation to make it seem like the new policy is not particularly unique, when in fact, it is exclusively unique.

FDA advisors voted 21-0 to authorize Moderna’s vaccine for children 6 months old to 5 years old. Germany, France, Denmark, Norway, Sweden, and Finland all suspended Moderna for people under 30 due to safety concerns. But in the US we’ll now be giving this product to infants.

Many corporate press reports, in hailing the announcement, churned out stenography today that made a quick mention of the fact that “a dozen countries, including China, already vaccinate kids under 5.” But when you break down the data further, a true scandal arises.

As of a couple weeks ago there were only 7 countries where kids under 5 were given COVID injections, though the WHO now claims that number is 12. The seven countries on record are: Argentina, Bahrain, Chile, China, Cuba, UAE and Venezuela. (the territory of Hong Kong, which uses the Chinese-made shots, is sometimes listed as the eighth country on record)

But that’s only the beginning of the madness. Venezuela and Cuba are the only countries that allow for COVID shots between the ages of two and three. The rest of the countries only go as young as three. Moreover, none of the nations are using mRNA. 5 out of 7 are using Chinese manufactured inactivated vaccines. Cuba and Venezuela are using the Cuban homebrew shot.

And NONE of these countries are allowing for COVID shots between the ages of 6 months to two years, which means that the United States has become the only country in the world to allow for experimental COVID injections shots for babies and 2 year old toddlers.