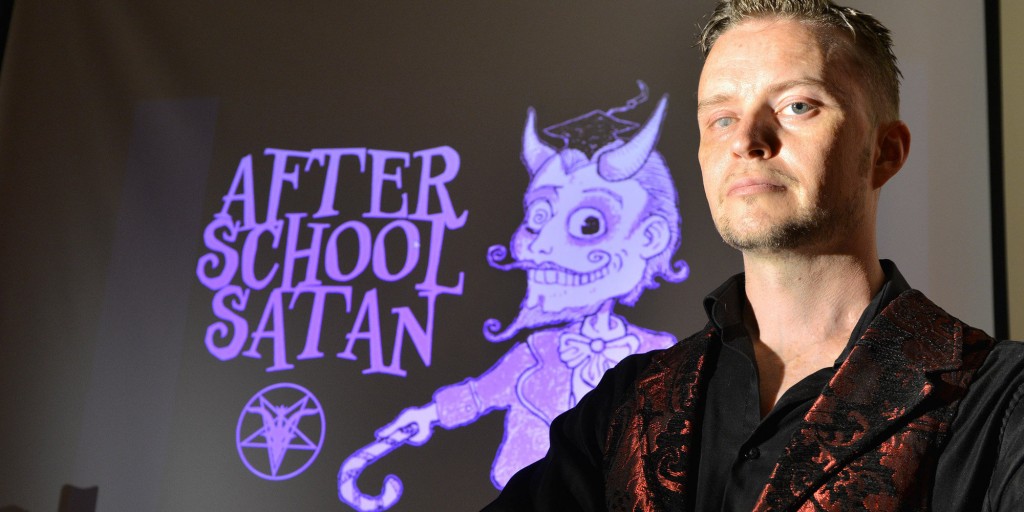 SALEM, MA – JULY 25: Lucien Greaves, is spokesman for The Satanic Temple, a group of political activists who identify themselves as a religious sect, are seeking to establish After-School Satan clubs as a counterpart to fundamentalist Christian Good News Clubs, which they see as the Religious Right to infiltrate public education, and erode the separation of church and state. (Photo by Josh Reynolds for The Washington Post via Getty Images)

SALEM, Mass. —It’s a hot summer night, and leaders of the Satanic Temple have gathered in the crimson­-walled living room of a Victorian manse in this city renowned for its witch trials in the 17th century. They’re watching a sepia-toned video, in which children dance around a maypole, a spider crawls across a clown’s face and eerie, ambient chanting gives way to a backward, demonic voice-over. The group chuckles with approval.

They’re here plotting to bring their wisdom to the nation’s public elementary school children. They point out that Christian evangelical groups already have infiltrated the lives of America’s children through after-school religious programming in public schools, and they appear determined to give young students a choice: Jesus or Satan.

“It’s critical that children understand that there are multiple perspectives on all issues, and that they have a choice in how they think,” said Doug Mesner, the Satanic Temple’s co-founder.

On Monday, the group plans to introduce its After School Satan Club to public elementary schools, including one in Prince George’s County, petitioning school officials to allow them to open immediately as the academic year starts. Chapter heads from New York, Boston, Utah and Arizona were in Salem on July 10 talking strategy, with others from Minneapolis, Detroit, San Jose, New Orleans, Pittsburgh and Florida participating online. The promotional video, which feels like a mash-up of a horror movie trailer and a “Saturday Night Live” sketch, will serve to promote the new club along with its website — Afterschoolsatan.com.

The Satanic Temple — which has been offering tongue-in-cheek support for the fallen angel in public arenas that have embraced prayer and parochial ceremonies — is bringing its fight over constitutional separation of church and state to the nation’s schools.

But the group’s plan for public schoolchildren isn’t actually about promoting worship of the devil. The Satanic Temple doesn’t espouse a belief in the existence of a supernatural being that other religions identify solemnly as Satan, or Lucifer, or Beelzebub. The Temple rejects all forms of supernaturalism and is committed to the view that scientific rationality provides the best measure of reality.

According to Mesner, who goes by the professional name of Lucien Greaves, “Satan” is just a “metaphorical construct” intended to represent the rejection of all forms of tyranny over the human mind.

The curriculum for the proposed after-school clubs emphasizes the development of reasoning and social skills. The group says meetings will include a healthful snack, literature lesson, creative learning activities, a science lesson, puzzle solving and an art project. Every child will receive a membership card and must have a signed parental­ permission slip to attend.

“We think it’s important for kids to be able to see multiple points of view, to reason things through, to have empathy and feelings of benevolence for their fellow human beings,” said the Satanic Temple’s Utah chapter head, who goes by the name Chalice Blythe.

The emphasis on multiple perspectives is a hint pointing to the Temple’s true foe. The group at first intends to roll out the clubs in a limited number of schools in districts that also host an evangelical Christian after-school program known as the Good News Club.

Good News Clubs, which are sponsored by an organization founded in 1937 called the Child Evangelism Fellowship (CEF), aim to reach children as young as 5 with a fundamentalist form of evangelical Christianity. For most of their history, Good News Clubs were largely excluded from public schools out of concern that their presence would violate the Constitution.

In 2001, in a case that commanded the resources of powerful legal advocacy groups on the religious right, including the Alliance Defending Freedom and the Liberty Counsel, the U.S. Supreme Court ruled that to exclude an after-school program on account of the religious views of its sponsors amounted to a violation of free-speech rights. The CEF then went on a tear, and by 2011, it reported 3,560 Good News Clubs, putting them in more than 5 percent of the nation’s public elementary schools.

The Satanic Temple makes no secret of its desire to use that same approach.

“We would like to thank the Liberty Counsel specifically for opening the doors to the After School Satan Clubs through their dedication to religious liberty,” Greaves explained to the gathering of chapter heads in Salem. “So, ‘the Satanic Temple leverages religious freedom laws that put after-school clubs in elementary schools nationwide.’ That’s going to be the message.” User Poll Results:

Voting is closed on this poll

The Liberty Counsel agrees that the Satanic Temple has a right to organize its clubs in public schools and takes the view that they can’t be banned so long as they’re not disruptive or engaging in rituals that put people at risk.

“I would definitely oppose after­-school Satanic clubs, but they have a First Amendment right to meet,” said Mat Staver, Liberty Counsel’s founder and chairman. “I suspect, in this particular case, I can’t imagine there’s going to be a lot of students participating in this. It’s probably dust they’re kicking up and is likely to fade away in the near future for lack of interest.”

The Satanic Temple is eager to compete directly with the Good News Clubs and doesn’t hide its belief that its own after-school product is on the right side.

“While the Good News Clubs focus on indoctrination, instilling children with a fear of hell and God’s wrath, After School Satan Clubs will focus on free inquiry and rationalism,” Greaves said. “We prefer to give children an appreciation of the natural wonders surrounding them, not a fear of an everlasting other-worldly horror.”

Good News Club leaders have defended their organization’s presence in public schools. According to the Good News Club’s website, “each club includes a clear presentation of the Gospel and an opportunity for children to trust the Lord Jesus as Savior. Every club also includes strong discipleship training to build character and strengthen moral and spiritual growth.” 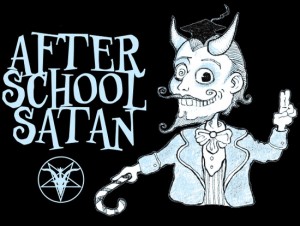 Amy Jensen, a professional educator in Tucson who has a master’s degree in curriculum, instruction and teaching from the University of Denver, says she has decided to lead an After School Satan Club after comparing its curriculum materials with those of the Good News Club. Jensen noted that the Satanic Temple’s materials say the group encourages benevolence and empathy among all people, and advocates practical common sense.

“As a teacher, if I were deciding whether to teach that or the fear and hatred of other people’s beliefs, which is what Good News Clubs teach, I would choose what the Satanic Temple has available,” she said.

Like all ASSC teachers, Jensen is a volunteer. To cover After School Satan Club costs, including facility use fees and curriculum materials, the Satanic Temple is launching a crowdfunding campaign — which is how it covers many of its initiatives.

The blend of political activism, religious critique and performance art that characterizes the After School Satan Club proposal is not a new approach for the Satanic Temple. It is just the most recent in a series of efforts that have made the Temple famous and notorious.

In 2014, after the Supreme Court ruled that the regular recitation of prayers before town meetings did not violate the First Amendment, provided that towns do not discriminate among religions, the Temple decided to test just how much religious liberty towns allowed. They volunteered to perform a Satanic benediction in an Arizona town where the board had regularly opened with a Christian prayer. In that case, the town preferred to abolish the practice of opening prayers.

David Suhor, from the Satanic Temple, delivered a unique invocation after several minutes of protester disruption at a Pensacola City Council meeting in Florida on July 14. (Gillian Brockell/The Washington Post)

In this and other instances — such as when the Satanic Temple proposed the installation of a statue of Baphomet in Oklahoma in response to a stone monument emblazoned with the Ten Commandments — the thrust of the Temple’s activism has been to prevent religious groups from claiming the mantle of implicit state endorsement. 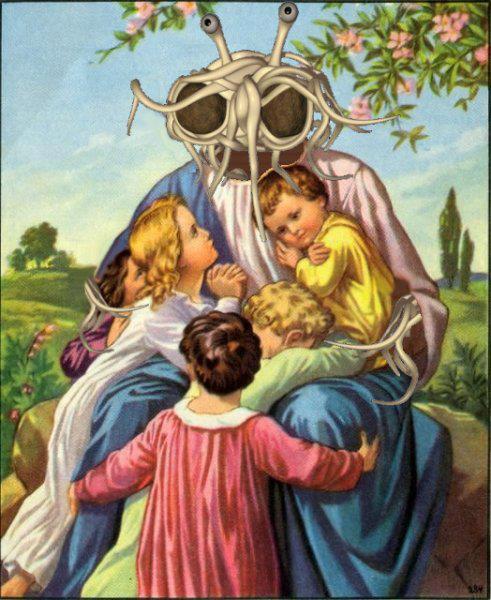 The Gospel of the Flying Spaghetti Monster

The group’s activism has much in common with a movement started a decade ago, when Bobby Henderson of the Church of the Flying Spaghetti Monster penned an open letter to the Kansas School Board in 2005, citing fears that the introduction of teaching religious intelligent design alongside the theory of evolution would inculcate public school students with Christian thought. Henderson argued that believing that there is a benevolent deity made of spaghetti and meatballs is just as legitimate as believing in God. Believers in the Flying Spaghetti Monster took on the name “Pastafarians.”

Like the Satanic Temple, the Pastafarians insist that theirs is a genuine religion. According to Henderson, who published “The Gospel of the Flying Spaghetti Monster” in 2006, it’s inaccurate to say that his church is “purely a thought experiment or satire.”

“The Church of FSM is legit, and backed by hard science. Anything that comes across as humor or satire is purely coincidental,” Henderson says on his website. “Let me make this clear: we are not anti-religion, we are anti-crazy nonsense done in the name of religion. There is a difference.”

Greaves likewise insists that the Satanic Temple is much more than satire: “We’ve moved well beyond being a simple political ploy and into being a very sincere movement that seeks to separate religion from superstition,” he said.

The Satanic Temple expects to face opposition to its after-school proposal. When the group sought to erect the Baphomet monument, the Oklahoma governor’s office dismissed the proposal as “absurd,” and right-wing activists joined the attack.

Given the fight ahead and the long odds of pushing Christianity out of public schools, an important question about the After School Satan Clubs is: Does the Satanic Temple really want religion — even its own — in public schools?

Greaves is blunt: “We are only doing this because Good News Clubs have created a need for this. If Good News Clubs would operate in churches rather than public schools, that need would disappear. But our point is that if you let one religion into the public schools you have to let others, otherwise it’s an establishment of religion.”

In the 2001 Supreme Court ruling, Justice David Souter penned a scathing dissent. He suggested that the decision would bring about a world in which “any public school opened for civic meetings must be opened for use as a church, synagogue, or mosque.”

The Satanic Temple probably wasn’t front and center in his thinking. Yet it appears determined to prove him correct.