“Now, therefore, revere Hashem and serve Him with undivided loyalty; put away the gods that your forefathers served beyond the Euphrates and in Egypt, and serve Hashem.” Joshua 24:14

After two years of ISIS occupation, the remains of an underground church from the third or fourth century were discovered in Manjib. The plot of land above the church was used by the ISIS marauders as a dumping ground. The entrance to the tunnel leading down to the church was hidden under a heap of garbage leaving just the stones of the gate barely visible above ground. The passage, carved into the bedrock, leads down into a labyrinth of tunnels.

Abdulwahab Sheko, head of the Exploration Committee at the Ruins Council in Manbij, had begun studying the archaeological sites in 2014 when ISIS took over the region. Sheko managed to keep the site hidden until ISIS was driven out by US-backed forces in 2016. The site had to be cleared of landmines and explosives before efforts at clearing the area began. Digging and research on the site could not begin until last August. 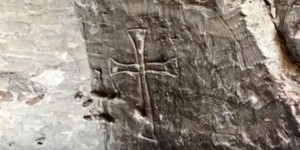 A Christian cross discovered in what appears to have been a hidden church in Syria from the 3rd or 4th century. (Screenshot/YouTube)

When Sheko began his investigations, he discovered a complex of tunnels that were clearly used by early Christians. One chamber, believed to be a chapel, features three jagged steps leading up to what researchers believe was an altar. Various types of crosses and inscriptions are carved into the walls of the tunnels.

A second underground site was discovered by local residents with indications it was also a Christian religious site. Like the first site, it was used as a dumping ground. Efforts to clear it began in September 2017.

“[The tunnels] indicate that there was a significant Christian population in the area which felt they needed to hide their activities,” John Wineland, professor of history and archaeology at Southeastern University, told Fox News. “This is probably an indication of the persecution by the Roman government, which was common in the period.”

“The Romans misunderstood many Christian practices and would often charge them with crimes, such as cannibalism,” Wineland said to Fox News, explaining this was based on a “Roman misunderstanding of Christian communion where [Jesus] said to take and eat His body and drink His blood.”

The ancient reminder of the persecution of Christianity accents the current situation in which Christians are a persecuted minority in the region. Before the civil war began in Syria in 2011, Christians were ten percent of the population.

“[Persecution] has led to a significant decline of Christians in the region,” Wineland said. “Some have been killed, others have fled, and still others have been coerced into converting to Islam.”

“We are Muslim, but we are not like ISIS Muslims,” Sheko said. “We take care of these Christian ruins. We respect them. We respect humanity.”