WASHINGTON – In a span of only 25 years, under the direction of Shirley Dobson, the National Day of Prayer has been observed at over 630,000 events with more than 33 million people praying for America. Today, a new chapter begins as Mrs. Dobson steps into the role of Chairman Emeritus and passes the mantle of leadership to Mrs. Anne Graham Lotz.

“After much prayer and careful consideration, I am pleased to announce that Mrs. Anne Graham Lotz, daughter of Dr. Billy Graham, has graciously accepted this new role, and will succeed me as the new chairman of the National Day of Prayer Task Force,” said Dobson. 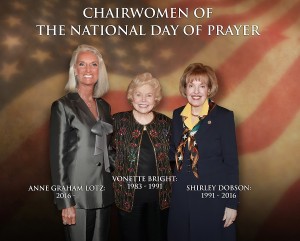 The New York Times named Anne Graham Lotz whom her father, Billy Graham, refers to as “the best preacher in the family,” one of the five most influential evangelists of her generation. She is also a prayer warrior, powerful speaker, best-selling author and the founder and president of her own organization, AnGeL Ministries. Anne’s latest book, The Daniel Prayer: Prayer That Moves Heaven and Changes Nations, releases May 10, and will encourage, equip and engage readers in effective, passionate prayer.

“For the past three years I have felt a compelling urgency to pray,” said Lotz. “As a result my organization, AnGeL Ministries, has offered five worldwide prayer initiatives that have drawn tens of thousands into prayer. So when Shirley Dobson asked me to succeed her as the Chairman of the National Day of Prayer Task Force, I was highly honored.”

“I believe I’m called by God to those everywhere who call on the name of our Lord Jesus Christ (1 Corinthians 1:1-2),” Lotz added. “I will continue to lead AnGeL Ministries as I accept this new assignment to not only get people into God’s Word, but also onto their knees in serious prayer for our nation.”

About the National Day of Prayer