Apostasy in the Church 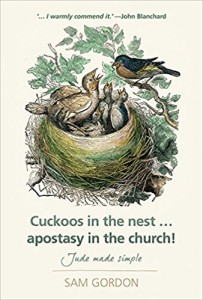 DONCASTER, UK (ANS) – Bible teacher and author Sam Gordon is to be congratulated on his excellent new book, Cuckoos in the Nest (Christian Year Publications), which should set the cat among the proverbial pigeons!

A commentary on the brief yet much neglected epistle of Jude, it tackles apostasy in the church – so prevalent these days as Christians increasingly succumb to intimidation from politically-correct secular-humanism.

As Sam points out, Jude was a man of great humility, imitating his Master who was actually his half-brother! Instead of pulling rank, he describes himself as “a servant of Jesus Christ and a brother of James”.

Jude had hoped to write about the salvation he shared with his readers, but felt compelled to address the much more urgent issue of how ungodly people had secretly slipped in among them to “pervert the grace of our God into a license for immorality and deny Jesus Christ our only Sovereign Lord”.

This is also what has been happening over the past 50 years, especially in light of recent decisions to approve same-sex marriage and deny the Bible’s authority.

With his straightforward yet colorful language, Sam challenges the modern church to test whether they are being led astray by “shepherds who feed only themselves…clouds without rain, blown along by the wind; autumn trees, without fruit and uprooted – twice dead”.

He emphasizes personal responsibility for keeping ourselves in God’s love by building ourselves up in the faith and praying in the Holy Spirit.

Jude’s focus was on urging his hearers to “contend for the faith that was once for all entrusted to God’s holy people” which means it is important to challenge the accepted norms of society that are increasingly being absorbed by the church as Christian leaders blend in with their surroundings like frightened chameleons.

Although you don’t often hear it read as a lesson, many familiar with the communion liturgy will often have heard the paean of praise with which Jude ends his letter – one of the most magnificent pieces of literature ever composed: “Now unto him who is able to keep you from falling, and to present you faultless before the presence of his glory with exceeding joy; to the only wise God our Saviour, be glory and majesty, dominion and power, both now and forever. Amen.” (King James Version)

We need to heed Jude’s warnings, Sam concludes, quoting the wise counsel of Bishop J C Ryle, the 19th century evangelical leader: “Let us receive nothing, believe nothing, follow nothing which is not in the Bible, nor can be proved by the Bible.”

As Sam puts it: “The truth is, if the church is going to flourish, then the cuckoos in the nest have to go!”

A former CEO of Messianic Testimony, Sam Gordon now heads up his own ministry, Truth for Today (www.truthfortoday.co.uk) as he continues to travel the world encouraging believers.