Human Coalition’s app, still available on the Google Play Store, displays a list of prayer requests, such as, “Someone considering abortion in Dallas, Texas.” When users signal with a swipe of their thumb that they’ve prayed for the situation, the app updates a daily tally of prayers.

Slate blogger Christina Cauterucci questioned how the group could know when a woman considers abortion or decides against it and called the app “a discomfiting invasion of privacy or a gigantic lie.” The New Statesman’s Amelia Tate queried, “Are digital anti-abortion prayers sanctioned by the church? Do they reach God? Though these questions may seem faintly ridiculous, their answers seem more important than ever. When it comes to the tech behind these anti-abortion apps however, that is where people—religious or not—might do well to lose a little faith.”

Human Coalition spokeswoman Lauren Enriquez told me the prayer requests come from calls and appointments at the group’s network of seven pro-life pregnancy centers in Grapevine, Texas; Raleigh, N.C.; Pittsburgh; and Atlanta. She noted the group doesn’t post any personal information on the app. 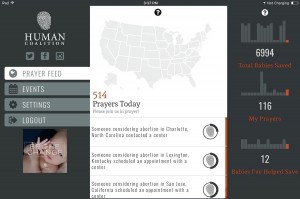 Tens of thousands of users have downloaded the app since it launched in 2013, Enriquez told me, calling Apple’s decision “unfortunate.”

“The pregnant women we serve are experiencing true crises,” Enriquez said. “Many of them do not have partner support, are single parents with other children, or are caught up in abusive or coercive relationships. Our supporters want to pray for the women and children we serve, and the app is a way of sharing prayer needs with them.”

Enriquez said nearly all women who call their centers are seeking abortions, and the group works to help them through whatever crisis they face. If a woman decides to keep her child, the workers verify the birth and “count that child as rescued.”

Human Coalition claims to have saved 7,292 babies since its founding in 2009, and Enriquez gave credit in part to the people who pray for the centers and their clients.

When Apple removed the app, it notified Human Coalition the program didn’t meet functionality requirements. But the app, which has a near five-star rating on the Google Play Store, had been available in Apple’s App Store for several years. Apple didn’t cite any improvements necessary to reinstate the app.

This is not the first time Apple has removed a Christian app after complaints: The company deleted ex-gay ministry Exodus International’s app in 2011 and removed the ex-gay app Setting Captives Free in 2013.