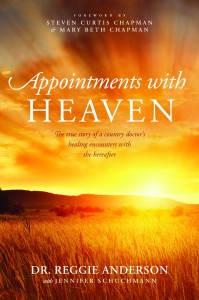 SAN CLEMENTE, CA (ANS) — Recently, I wandered into the bookstore at church one Sunday morning. Scanning the biography section, my eye fell on Dr. Reggie Anderson’s book Appointments with Heaven.

Back home I found a comfortable place at the nearby harbor, near boats and seagulls, and started to read a remarkable and well-written book.On the back jacket I read “Meet the country doctor who visits the front porch of heaven . and witnesses what awaits there.” That peaked my interest and I bought the book.

The country doctor was raised in a Christian home and, growing up, worked with his cousins who were farmers and grew, among others, water melons. Young Reggie helped transport and sell them on market days. They were a close-knit, clean living family.

Then an unimaginable tragedy happened. Some escaped convicts went on a rampage and killed 6 of his cousins and their families in cold blood during a robbery. Young Reggie was devastated and unable to fathom why a loving God he had believed in all this life, would allow such a disaster to happen.

He turned his back on this faith and continued life as an atheist. In college, he met and dated a beautiful girl. She was a Christian and, early in their relationshi p, she asked Reggie if he was a Christian. The best answer he had was, “My parents are Christians”. That answer did not satisfy her.

When Reggie entered Medical School and studied anatomy in dissection class, he saw the intricate and beautiful way the human body was fashioned and began to realize there had to be a Creator.

He now entered a serious life-search, which took him to an isolated place in the mountains near a beautiful waterfall. His companions were C.S. Lewis’ book, Mere Christianity, and a copy of the Living Bible. After reading all day he went to sleep. It was then that the thin veil between life and death was momentarily opened to him and he saw his cousins in heaven, very much alive and happy. They urged him to let his rage against their killers go. He then heard the voice of Jesus asking him why he was so angry at Him. He received some amazing insights about his future.

When he woke up, he was a changed man!

At first, his girlfriend did not believe the change in him was not a fake to get her attention and it took a while for her to realize he really was a different person.

They were married and eventually had four children. Dr. Reggie graduated from medical school and took up practice as a country doctor to an underserved population.

Appointments with Heaven is filled with both dramatic and touching stories of Dr. Anderson’s patients and practice and the thin veil that parts when a new baby is born, and the departure of a dying patient as a soul leaves this world.

Especially poignant is their deep friendship with well-known gospel singer, Steven Curtis Chapman and his family. When the Chapman’s youngest daughter, Maria, was killed in a tragic accident, Dr. Reggie and his family offered their home as a refuge and helped the Chapman’s walk through their grief. Today, there’s a beautiful orphanage in China, Maria’s birth country, named after her.

Dr. Reggie Anderson has practiced family medicine for over twenty-five years and recently was awarded the Frist Humanitarian award by the Centennial Medical Center. He also serves as Chief of Staff of TriSar Ashland City Medical Center in Tennessee, and is Medical Director for three nursing homes. For more information go to www.appointmentswithheaven.com

I highly recommend this book, published by Tyndale Momentum, to everyone, especially those who need to be encouraged and inspired about life and death issues.

Aubrey Beauchamp, RN is the USA coordinator of the Hospital Christian Fellowship International. She’s the publisher of A New Heart, a quarterly publication since 1976, produced to “Encourage Christians in Healthcare”. She’s also written a study on Compassionate Care for the Sick and Hurting and has authored several books, including her autobiography. For information, go to WWW.HCFUSA.com or, to contact Aubrey by e-mail, she is at: HCFUSA@gmail.com.