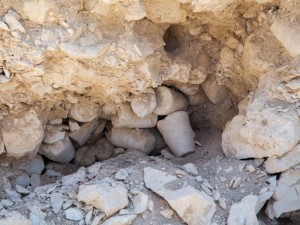 The 2,000-year-old workshop shows the effects of Jewish purity laws

(WNS)–Archaeologists have unearthed a 2,000-year old chalkstone quarry and workshop in Galilee, Israel. The man-made cave sits in the town of Reineh, sandwiched between Nazareth and Kafr Kana, believed to be the place Jesus turned water into wine.

The surfaces of the cave had chisel marks where workers cut out the soft stone. The archeologists also uncovered tableware in different stages of production and thousands of stone cores and other waste from making bowls, drinking mugs, and other vessels.

During the late Second Temple Era, many people used pots and storage containers made from clay. Yonatan Adler, a professor who led the excavations for the Israel Antiquities Authorities, said the Jews likely stopped using the clay vessels because their high porosity made them easily impure. The ancient Jewish law of ritual purity required objects that touched anything considered impure to be destroyed. “Stone, on the other hand, was thought to be material which never became ritually impure, and as a result ancient Jews began to produce some of their everyday tableware from stone,” Adler said.

Archaeologists believed the stoneware was distinctive to Jerusalem. But the cave is the fourth of its kind uncovered in Israel. The first two are located near Jerusalem in Hizma and Jebel Mukabber, while the other is also located in Reineh.

“The finished products were marketed throughout the region here in Galilee, and our finds provide striking evidence that Jews here were scrupulous regarding the purity laws,” Adler said.