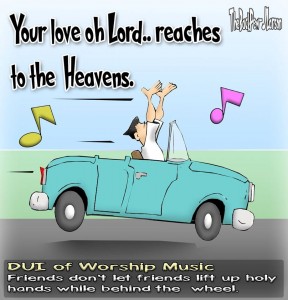 When I went to get my driver’s license renewed, our local motor-vehicle bureau was packed. The line inched along for almost an hour until the man ahead of me finally got his license. He inspected his photo for a moment and commented to the clerk, “I was standing in line so long, I ended up looking pretty grouchy in this picture.”

The clerk looked at his picture closely. “It’s okay,” he reassured the man, “That’s how you’re going to look when the cops pull you over anyway.”

“What’s your father’s occupation?” asked the school secretary on the first day of the new academic year.

“He’s a magician, ma’am” said Little Johnny. “How interesting. What’s his favorite trick?” “He saws people in half.”

“Wow! Now, next question. Any brothers or sisters?” “One half brother and two half sisters.”

A pastor assured his congregation he was their servant and that they should feel free to call him anytime they had a problem. That night the pastor’s phone rang at 3 a.m. On the other end was a dear elderly lady who said, “Pastor, I can’t sleep.” I’m so sorry to hear that,” he comforted her. “But what can I do about it?” the pastor said. She sweetly replied, “Preach to me a while, pastor.”

A big-city counterfeiter decided the best place to pass off his phony $18 bills would be in some small, out of the way, town. So, he got into his new wheels and off he went. He found a tiny town with a single store. He entered the store and handed one of the bogus bills to the man behind the counter. “Can you change this for me, please?” he said. The store clerk looked at the $18 bill a short time, then smiled and told the man, “Sure, Mister. You want 2 nines or 3 sixes?”

Useful words that ought to exist:

2) Cheedle – Residue on your fingers after eating Cheetos.
3) Crummox – Cereal bits in the bottom of the bag.
4) Fenderberg – Deposits of snow and ice that accumulate around your tires under the fender.
5) Flopcorn – Unpopped kernels at the bottom of the microwave bag.

“You just go ahead,” the man in the shopping mall said to his wife. “While you’re shopping, I’ll browse in the hardware store.” An hour later, she returned and saw him at the checkout counter. The clerk was ringing up the last of a pile of tools and supplies that would fill two wheelbarrows. “Are you buying all this?” his wife asked incredulously. “Well, yes,” he said, embarrassed. Then waving his arm toward the interior of the store, he added, “But look at all the stuff I’m leaving behind!”

A Sunday School teacher asked her class to draw pictures of their favorite Bible stories. She was puzzled by one drawing — it showed four people on an airplane! Teacher: “What Bible story is that?” Kid: “It’s the flight to Egypt.”
Teacher: “I see … and that must be Mary, Joseph, and Baby Jesus … but who’s the fourth person?” Kid: “Oh, that’s Pontius, the Pilot.”

A man parks his bicycle nearby the Capitol in Washington, DC and walks on. A police officer stops him and asks, “Why did you park your bicycle here? Don’t you know it is a VIP road and all congressmen and senators pass from here?” Man replied, “Don’t you worry about it, I locked my bicycle!”

A baseball manager who had an ulcer went to see his doctor for a checkup. “Remember,” the doctor said, “don’t get excited, don’t get mad, and forget about baseball when you’re off the field.” Then he added, “By the way, how come you let the pitcher bat yesterday with the tying run on second and two men out in the ninth?”

My forgetter’s getting better
But my rememberer is broke
To you that may seem funny
But, to me, that is no joke
For when I’m “here” I’m wondering
If I really should be “there”
And, when I try to think it through,
I haven’t got a prayer!

Oft times I walk into a room,
Say, “What am I here for?”
I rack my brain, but all in vain
A zero is my score.

At times I put something away
Where it is safe, but, Gee!
The person it is safest from
Is, generally, me!

When shopping I may see someone,
Say “Hi” and have a chat,
Then, when the person walks away
I ask myself, “Who was that?”

Yes, my forgetter’s getting better
While my rememberer is broke,
And it’s driving me plumb crazy
And that isn’t any joke.

A little boy watched, fascinated, as his mother gently massaged cold cream on her face. “Why are you rubbing that on your face, Mommy?” he asked. “To make myself beautiful,” said his mother. A few minutes later, she began removing the cream with a tissue. “What’s the matter?” he asked. “Are you giving up?”

Sometimes when I’m driving, I know I want to change lanes. I’m just not sure which lane I want. So I turn on my hazard lights. I may be going left, I may be going right … either way, you have been warned.

Little Johnny was eating breakfast one morning and got to wondering about things: “Mommy, why has Daddy got so few hairs on his head?” he asked his mother. “He thinks a lot,” replied his mother, pleased with herself for coming up with a good answer to her husband’s baldness. “So why do YOU have so much hair?” Little Johnny asks. “Go eat your breakfast!” snarled his mother.

As I left the grocery store, I noticed two little kids, maybe six or seven years old, selling candy bars in front of the store to raise money for their school band. “I’ll buy a chocolate bar on one condition,” I said to the boys. “You eat it for me.” I bought one and handed the candy back to one of the boys. He shook his head. “I can’t,” he said. “Why not?” Looking me in the eye, he responded gravely, “I’m not supposed to take candy from strangers.”

One day, an employee received an unusually large paycheck. She decided not to say anything about it. The following week, her check was for less then the normal amount, and she confronted her boss. “How come,” the supervisor inquired, “you didn’t say anything when you were overpaid?” Unperturbed, the employee replied, “Well, I can overlook one mistake but not two in a row!”

Thoughts for The Day:

Most computer problems are caused by a loose nut between the chair and the keyboard. ~ Luge is the only sport where you can die during the event and still win. ~ Love thy neighbor – tune thy piano. ~ Live a good, honorable life. Then when you get older and think back, you’ll be able to enjoy it a second time. ~ Lead me not into temptation, I can find it myself. ~ Just when I was getting used to yesterday, along came today. ~ Even if you are on the right track, you’ll get run over if you just sit there. ~ It’s lonely at the top, but you eat better. ~ If you jog backwards, will you gain weight?