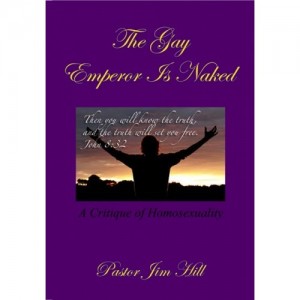 The Gay Emperor Is Naked

One friend of the author wrote, “In many ways, and for many reasons, I wish this book did not need to be written, or even that I could, in clear conscience, simply limp along with the cultural trends regarding this incendiary topic. However, I can’t, not because I have a guilty conscience, but because I love grace and truth, the foundation stones of who Jesus is as the Father’s expressed image.”

Statistically, according to Hill, it is healthier to be a chain smoker and a practicing alcoholic than an active homosexual. In fact, 2% of all active homosexuals experience 80% of all STD’s. He continues to report that statistics show that gays are, on average, vastly more promiscuous and vastly less faithful in committed relationships. They account for a greater proportion of the use of under-aged persons in commercial sex, and have higher rates of smoking, drug and alcohol use. He asks the reader this important question, “Does that sound healthy to you?”

The overwhelming evidence supports the claim that a great majority of persons who try homosexuality go on to leave it, while this is not the case with heterosexuals. This calls into question the innateness of homosexuality. Pastor Hill also reports that there is substantial evidence that there are common potential causal factors in the childhood histories of adults who identify themselves as homosexual, which suggests that such factors may well have caused homosexual ideation. It is the author’s belief that conventional wisdom is based upon casual assertion and little evidence, but also that truth can be known and that in the knowing of truth comes freedom for many who now suffer; many knowingly, others unknowingly. The truth can set people free. He invites the reader to pursue truth with him within the pages of his book.

Download a free sample of the book, The Gay Emperor is Naked at www.booksbyvision.com.