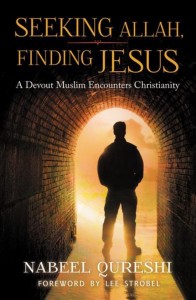 GRAND RAPIDS, Mich. – Zondervan is pleased to announce that Seeking Allah, Finding Jesus: A Devout Muslim Encounters Christianity by Nabeel Qureshi has sold more than 250,000 copies in all formats since its release in February 2014. With the publication of No God but One: Allah or Jesus?, in August 2016, Qureshi continues his story and work as a leading authority on the relationship between Christianity and Islam.

In Seeking Allah, Finding Jesus, Qureshi describes his dramatic journey from Islam to Christianity, complete with the friendships, investigations, and supernatural dreams he experienced. The book has been a consistent bestseller since its release. An expanded edition was released in April 2016 with an updated epilogue and new bonus content. A video study and a study guide are also available as of this summer. In addition to being a New York Times bestseller, Seeking Allah, Finding Jesus was awarded the Christian Book Award for the categories of both “Best New Author” and “Best Non-Fiction” of 2015 by the Evangelical Christian Publishers Association (ECPA).

Seeking Allah, Finding Jesus provides an intimate window into a loving Muslim home, as Qureshi shares how he developed a passion for Islam before discovering, through a good Christian friend, evidence that Jesus rose from the dead and claimed to be God. Unable to deny the arguments but not wanting to deny his family, Qureshi struggled with an inner turmoil that will challenge Christians, Muslims, and all those who are interested in the world’s greatest religions. Engaging and thought-provoking, Seeking Allah, Finding Jesus tells a powerful story of the clash between Islam and Christianity in one man’s heart-and of the peace he eventually found in Jesus.

Qureshi’s newest book, No God but One: Allah or Jesus?: A Former Muslim Investigates the Evidence for Islam and Christianity, releases August 30, 2016. In the decade following his conversion from Islam, Qureshi realized that the world’s two largest religions are far more different than they appear. In this follow-up book, Qureshi carefully examines Islam and Christianity in detail, exploring areas of crucial conflict and unpacking the relevant evidence. Throughout Qureshi shares stories from his life and ministry, casts new light on current events, and explores pivotal incidents in the histories of both religions. If Seeking Allah, Finding Jesus represents the heart of Qureshi’s story, the highly-anticipated No God but One details the mind of his faith journey.

To learn more about Qureshi and his books, visit www.nabeelqureshi.com.