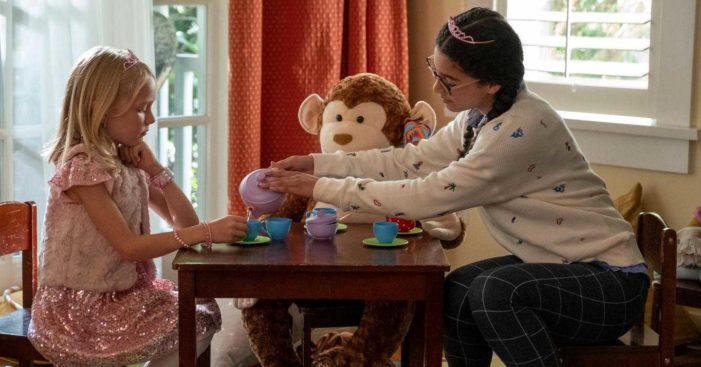 The Netflix series “The Baby-Sitters Club,” based on the 1980’s and 90’s preteen books written by author Ann M. Martin, has included transgenderism in one of its storylines, depicting the main character, Mary Anne Spier, coming to accept — and eventually defend — a young boy who believes he is a girl.

According to reports, “The Baby Sitters Club” dramatization noticeably takes liberties with its content, adding to what is depicted in the books — from even more obvious feminist mindsets, to the mention of a menstruation sculpture, to the inclusion of a “spiritual practitioner” a.k.a. witch, to a citation of the dating site Tinder and the film “The Handmaid’s Tale.”

Along those lines, episode four, “Mary Anne Saves the Day”, wades out into further politically-correct waters. In the episode, Mary Anne receives a phone call from one of her father’s co-workers, who requests that she babysit his child, named Bailey.

When Bailey needs a change of clothes during a play tea party, his sitter learns that the nine-year-old was actually born male but identifies as female. “These are my old clothes,” he explains to Mary Anne, who is befuddled at first by his comment about the attire in his closet.

She reaches out to her friend Dawn about the matter, who then tells her, “[I]f someone tried to make you do everything with your left hand, it would be super weird; right? That’s how Bailey feels. The same way that you know that you’re right-handed, Bailey knows she’s a girl … We all want our outsides to match our insides.”

During one visit, Bailey later develops a high fever, and Mary Anne takes him to the hospital. However, as medical staff refer to the child as a boy, Mary Anne comes to his defense, stating that “from here on out,” the hospital should “recognize her for who she is.” She also reportedly insists that they bring Bailey a pink gown as blue is a boy’s color.

Bailey is played by 10-year-old Kai Shappley, who in real life is a boy who identifies as a girl.

While some have applauded the episode as teaching others how to be an “ally” for those who identify as transgender, others see the broadcast as indoctrination and sinful influence, as it promotes a mindset that contradicts the law and creation of God.

“As a young woman, I am disappointed to see a show that will be viewed by many young and impressionable girls espousing such harmful views — without so much as a question about the consequences of these ideas,” wrote Arielle Leake, a policy and government Affairs intern at the Washington-based Family Research Council.

“Instead of giving young girls a proper view of what it means to be a woman, ‘The Baby-Sitters Club’ presents womanhood as something that is merely a product of your feelings and not a God-given identity,” she lamented.

“In a world that is becoming increasingly accepting of transgender ideology, parents should be cautious about the ideas being espoused in the media their children consume. Christians have a role to play in restoring an understanding that humans are a unique combination of both body and soul, which equally make up who we are and are not at war with each other.”

The program is rated G, meaning that it can be viewed by those of all ages, including young children.

In Matthew 19:4, Jesus pointed back to the Book of Genesis, stating, “Have ye not read that He which made them at the beginning made them male and female …?”