LIMA, Peru (BP) — Peru’s Nikkei, Japanese immigrants and their descendants, live and work among Peruvians, but their loyalties to Japanese identity and community can wind as tightly as red threads stitched around a baseball.

Although their circumstances dictate reliance on foreigners welcoming them as immigrants, their own Japanese culture compels a slow acceptance of outsiders, said International Mission Board missionary Tim Mitchell.

Tim and his wife Joy, both from Georgia, serve in the Peruvian capital of Lima, where they uniquely work among the Nikkei. About 100,000 Nikkei live in Peru, but only about 100 of them are evangelical Christians.

Overall, “the Nikkei are closed to the Gospel,” Tim noted. But they’re wide open to baseball, a sport that’s hugely popular in the land of their ancestors.

Although soccer is the top sport in Peru, many Nikkei express their passion for baseball through Peru’s baseball federation, which offers leagues for young players and a national team. These players include non-Japanese Peruvians, too, but most of the federation’s leaders and some of its coaches are Nikkei. And its leagues are full of aspiring young Nikkei players.

One of those players is a Peruvian Nikkei named Alonzo, who dreams of moving to the United States someday to play for the big leagues. He’s had a chance to meet a couple of former major leaguers through annual baseball clinics the Mitchells helped launch in 2011.

As for the Nikkei’s wound-tight loyalties to their Japanese roots, families and beliefs, the clinics build a bridge for Christians to take that first step inside their world.

Through these clinics, baseball-experienced, Christian players and coaches from the U.S. — including two former big league pitchers — help young baseball players improve their game. During a free clinic, held in January, these volunteers shared the Gospel through Bible stories, testimonies and one-on-one conversations with players. At the same time, Nikkei parents, coaches and federation leaders also heard the Good News of Christ. 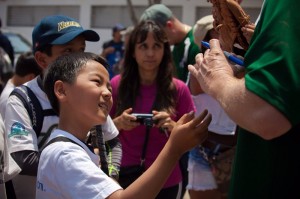 Caption 1: A young Nikkei player from the Peruvian baseball federation waits for the ink to dry after obtaining former big leaguer Tommy Phelps’ autograph on his baseball. Nikkei are Japanese emigrants and their descendants. Peru is home to about 100,000 Nikkei, only about 100 of them evangelical Christians.

Tim said “the Nikkei do not trust outsiders, but one day many of them will accept the God of the baseball coaches because they are seeing and understanding God’s love through this ministry.”

Although the Nikkei are relatively closed to the Gospel, the Mitchells and the volunteers have seen at least 20 Peruvian Nikkei make public decisions to accept Christ during baseball clinics held the last three years.

“After these five years [since the project’s inception], they see we’re just coming here to love them. We’re not here to take their money, or take advantage of them,” said volunteer team leader Gary Payne, executive pastor at Bell Shoals Baptist Church, Brandon, Fla.

Payne and his team travel to Lima every January, but throughout the year the Mitchells water the seeds sown through further developing relationships with players like Alonzo.

Through Alonzo attending the baseball clinics, the Mitchells have gotten to know his parents, who visit to watch major leaguers help their son improve his skills.

“The baseball clinic has opened up a chance for us to get to know this family at a much deeper level and have an ongoing relationship,” Tim said.

The Mitchells also help Alonzo improve his English, which will ease his transition to the U.S. if he goes there someday. They also reinforce the Gospel message through their sacrifice of time.

A current challenge is that the Mitchells are transferring to Japan later this year to serve among Latin American Nikkei living there. For economic reasons, many of these Nikkei have moved to Japan to work in its factories.

As the Mitchells prepare to leave for Japan, they’ve been praying about leaving their established ministry in Peru in good hands.

A big answer — really three of them — came during baseball clinics held in Lima in mid-January. Three other missionary families — serving in Peru through other mission organizations — attended these clinics. All three volunteered to continue following up with players, parents and coaches who made spiritual decisions. One missionary had been praying for how he could begin working with the kids in the league so he could share the Gospel.

“I think we helped open this door for him in a big way,” Tim said.

Although the Mitchells will be moving to Japan, Tim plans to return to Peru annually to work with future baseball clinics involving Christian volunteers. 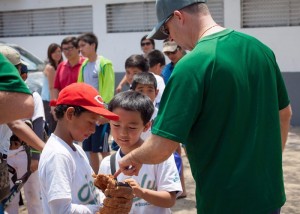 Caption2: Kevin Ohmé, former pitcher for the St. Louis Cardinals, takes time out to talk with some young Japanese-Peruvian baseball fans in Lima, Peru. Ohmé, from First Baptist Church, Brandon, Florida, has traveled to Lima for the past five years to participate in annual baseball clinics, where players hear the gospel while improving their baseball techniques.
Photo by Lina White/IMB

At the end of this year’s clinic, the baseball outreach hit a high note when volunteers, the Mitchells and baseball officials gathered at Lima’s Japanese Cultural Center for a farewell dinner. Although the center has a policy forbidding religious expression, the federation’s president surprised them by asking volunteer team leader Payne to pray a blessing before the meal.

At these dinners in past years, a Nikkei coach has entertained the team with a Japanese song and invited volunteers to sing an American one as well. This year Florida Baptist volunteer Josh Howard sang Matt Redman’s “10,000 Reasons (Bless the Lord),” a song based on Psalm 103.

“It was intimidating to stand and sing a cappella in front of friends and others in such an intimate setting, but it was an awesome blessing to find out that we praised God through song in a place that has said that worshiping God is not allowed,” said Howard, from First Baptist Church of Brandon.

“The Nikkei people are truly warm and inviting, after you win their favor,” added another volunteer from First Baptist Church Concord in Knoxville, Tenn. “We do this by producing a quality baseball product — opening the doors for the kingdom work that underlies everything we do.”

— Pray for Tim and Joy Mitchell, IMB missionaries among the Nikkei of Peru, as they move to Japan to work with Latin American Nikkei there.

— Ask God to call out some U.S. Christian families to host Nikkei students in their home — for a semester or summer — to help them learn English and to share the Gospel with them.

— Ask God to call out U.S. believers gifted in business leadership and/or teaching English as a Second Language to use their skills in reaching Latin America’s Nikkei.

To join the Mitchells’ prayer team, contact them at tcmsbox@gmail.com.

To view a broader feature package about the Mitchells’ work and to learn how you can get involved, click here. For more information about the Nikkei of Latin America, click http://stories.imb.org/americas/interactives/view/who-are-the-nikkei-of-latin-america