Before we become the Borg 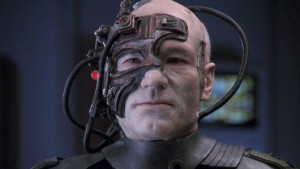 (WNS)–The Borg, nemesis of the universe in the popular science fiction series Star Trek, was a civilization of cybernetic beings with technologically interconnected minds. Humans are a long way from developing technology that could make anything like the Borg, but an international group of neuroscientists warns the growing ability to use computer hardware and software to directly interact with the human brain calls for new ethical guidelines.

Brain-computer interface (BCI) technology mainly focuses on treating people with spinal cord injuries, but in an essay that appeared in the journal Nature, researchers said the science could soon lead to the ability to directly manipulate an individual’s brain to control intentions, emotions, and decisions. The neuroscientists envision a day in the not-so-distant future when humans interface with devices not through their fingers or voice but merely by thinking. Just as when we think about moving our arm it moves, we will think about what we want our computer to do, and it will do it.

The researchers noted in the essay that such technology could open the way for corporations, hackers, governments, and others to find new ways to exploit and manipulate people. It could compromise our private mental lives and autonomy. Governments could create a military force with superhuman intelligence, endurance, and capabilities.

It seems likely this type of technology will continue to advance rapidly. According to the researchers, for-profit industries currently spend $100 million per year on neurotechnology and, under President Barack Obama’s BRAIN Initiative, the U.S. government has spent another $500 million since 2013.

To protect privacy and identity, the experts recommended establishing an international convention to define ethical guidelines and prohibitions for neurotechnology. They suggested public education and laws that strictly regulate the sale and commercial use of personal brain data. They further recommended controlling protocols for military use of BCI, just like the Geneva Protocol controls chemical and biological weapons use.

“We just want to ensure that this new technology, which is so exciting and which could revolutionize our lives, is used for the good of humankind,” Rafael Yuste, director of Columbia University’s Neurotechnology Center and a member of the Data Science Institute, said in a statement.