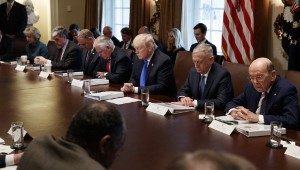 Housing and Urban Development Secretary Ben Carson led President Donald Trump and his Cabinet in prayer during a meeting recently.

The retired pediatric neurosurgeon and Seventh Day Adventist has previously said he prayed before every surgery, according to CNBC. This time, Carson prayed as the GOP-led tax reform legislation headed to the House for a final vote.

He thanked God for “the opportunities and the freedom” in the U.S., as well as for the “courageous” president and Cabinet. “We thank you for a president and for Cabinet members who are courageous, who are willing to face the winds of controversy in order to provide a better future for those who come behind us,” Carson prayed.

He then referenced the national debt, which, as reported by the U.K. Daily Mail, is expected to increase by $1.5 trillion with the tax cut. “We’re thankful for the unity in Congress that has presented an opportunity for our economy to expand so that we can fight the corrosive debt that has been destroying our future,” he said.

“And we hope that that unity will spread even beyond party lines, so that people recognize that we have a nation that is worth saving. And recognize that nations divided against themselves cannot stand.”

“In this time of discord, distrust and dishonesty, we ask that you would give us a spirit of gratitude, compassion and common sense, and give us the wisdom to be able to guide this great nation in the future,” Carson said. “We ask in the name of the Father, the Son, and the Holy Spirit. Amen.”

After the prayer, Vice President Mike Pence commended the president for “delivering on that middle-class miracle” that is the tax cut. “I know I speak on behalf of the entire cabinet and of millions of Americans when I say congratulations and thank you,” Pence said. “Thank you for seeing through the course of this year an agenda that truly is restoring this country.”

The tax bill ended up being passed in the House by a final vote of 224-201. Twelve House Republicans opposed the measure, as did every Democrat present for the vote. After the bill passed, Trump tweeted an image of a gift of money being opened to reveal the words, “Tax Cuts for Christmas.”

As reported by The Western Journal, the bill ensures that the first $12,000 an individual (or $24,000 a couple) earns is not taxable. The legislation also increases the child tax credit from $1,000 to $2,000, with up to $1,400 available as an IRS refund for families owing little or no federal income tax.

The corporate tax rate will also be reduced from 35 percent to 21 percent.