Beware of the far-left push at the pulpit, say filmmakers 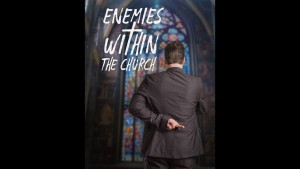 A documentary filmmaker says he is hard at work exposing the growing influence of radical far-left activism in evangelical congregations.

Documentary producer Trevor Louden says the 2016 film “Enemy Within” about communism’s influence in American politics opened his eyes to the threat, and he is now working with director Judd Saul to expose that influence in churches and their leaders.

The producer and director described their upcoming church documentary in a Nov. 9 interview on the “Sandy Rios in the Morning” radio show, where they described how communism has managed to influence people by hijacking movements.

The far-left goal in politics has always been to move government toward socialism and eventually communism, Louden said, and a similar goal is now under way to move churches leftward, too. Over time, he warned, that leftward drift affects the voting base inside those conservative churches, which is the ultimate goal of the far-left provocateurs.

The gospel message is still preached, he told Rios, but it’s “what they add on that is the problem.”

That is why church members are hearing more about social justice and “white privilege,” warnings from the pulpit about global warming and a fragile planet, and sympathy for illegal immigrants and refugees attempting to enter the United States, the filmmakers said.

Southern Baptist ConventionThe filmmakers told Rios one organization that drifted left in recent years is World Vision, the child relief organization, and a second one in danger of that far-left drift is Cru, formerly Campus Crusade for Christ, founded in the 1950s by Bill Bright.

Louden said he was informed by a Cru employee about the drift away from its gospel roots and was told to expect an exodus of employees, unwilling to follow that drift, in the near future.

A veteran radio talk show host says she was not shocked by accusations that evangelical churches are the target of far-left activism.

Sandy Rios interviewed documentary filmmakers Trevor Loudon and Judd Saul for most of her one-hour program Nov. 9, allowing them to describe their claims and allegations to the American Family Radio audience. The targets of their upcoming documentary include The Gospel Coalition, ERLC leader Russell Moore, pastor-teacher Tim Keller, and organizations such as Cru, formerly Campus Crusade for Christ.

Rios, who worked as a talk show host in Chicago, tells OneNewsNow she has enough experience with the Left’s infiltration into Christian organizations that she is not easily shocked by the claims. The most serious allegations aired on the show, she says, is that Moore and Keller “might be willing infiltrators/manipulators” to an unsuspecting Church.

“Both have large evangelical audiences and followers,” she says, “and to accuse them of this is no small matter.”

Rios can’t personally affirm the filmmakers’ allegations, she adds, “but I know them well enough to know we should heed their warnings and ‘test the spirits to see if they be of God.'”

One unsurprising named dropped by the filmmakers is Jim Wallis, the controversial Soujourners founder whose namesake magazine publishes stories such as “A Radical Redistribution of Love” that all but compares communism to brotherly love.

A second name dropped by the filmmakers on the radio program is Russell Moore, the controversial Southern Baptist figure who now leads that denomination’s Ethics and Religious Liberty Commission (ERLC) based in Nashville, Tenn.

Moore has already caused problems within the conservative denomination, such as ridiculing Southern Baptists who voted for Donald Trump, among other questionable decisions. But the filmmakers told Rios their upcoming documentary will describe how Moore attended a “strategy session” with leaders from the Human Rights Campaign (HRC), a powerful homosexual-rights group based in Washington, D.C.

The filmmakers were likely referring to a 2014 ERLC conference on same-sex marriage that was described in a HRC press release, which complained about the SBC but made it clear HRC was sending leaders to sit down with Moore.

The filmmakers claimed in the American Family Radio interview that Moore met with HRC as an ally, not a SBC official hoping to exchange views. OneNewsNow contacted ERLC for comment about the filmmakers’ accusations but did not get a response from the organization.

“These are hard things to talk about,” Rios observed at one point, when the filmmakers accused author-pastor Tim Keller of flirting with far-left activism, too.

“This is pretty sinister and pretty deep,” Louden told the radio program. “This isn’t just a bunch of liberals who had taken over some churches. This is an organized Marxist program to pervert and corrupt American Christianity.”