Beyond the Mask Movie: Swashbuckling Fun, With a Message 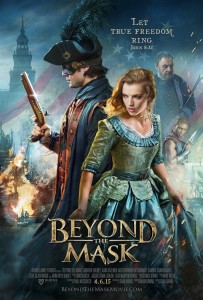 Working for the controversial British East India Company, Will Reynolds wreaks havoc in India and guns down British sailors to steal a parliamentary report damaging to his employer.  But when his boss, Charles Kemp (John Rhys-Davies, Lord of the Rings, Raiders of the Lost Ark), wants him to continue these exploits in the American colonies, Reynolds demurs, desiring a new life.  Avarice-driven Kemp orders his murder.

Through ensuing twists and turns, Will cheats death multiple times, disguises himself as a pastor, falls for Charlotte, and surreptitiously follows her to the New World to demonstrate his new ways.  A mask conceals his identity – a la the Lone Ranger or Zorro – while he does good.

Reynolds discovers a British plot that could sink the new nation before its launch.  His rescue efforts and escapades have him running across rooftops, crashing through windows, jumping into bodies of water, negotiating burning buildings, and more.  Think Indiana Jones meets Three Musketeers meets Captain America.

Your masks and mine?

Several people wear masks in this story.  Will’s literal and figurative masks seek to develop a new image to obscure/redeem his older one.  Kemp’s prosperous businessman image masks his treacherous, deadly manipulation.  “We all have to come to terms with our contradictions,” Kemp admits.  “I have.”

Many in real life create masks to disguise their true personalities.  Social commentator Del Tackett notes of such concealment, “If who I am doesn’t bring me the significance that I want, then I’ll build a mask to change who I am, to try to make people think that I’m different than who I am.”

Director Chad Burns feels the film’s mask theme will resonate with viewers.  He notes of Will, “The literal mask he puts on to disguise his identity—or to create a new one—that’s us. That’s Facebook. That’s Twitter. We create these masks, too.”

Will is trying to redeem himself in society’s and in Charlotte’s eyes.  Charlotte helps him realize that the love and redemption that will bring him ultimate satisfaction actually are works of God – gifts, not rewards to be earned:  “Don’t you know?” she explains to Will.  “Neither redemption or (sic) love can ever be earned. … They are both gifts … to be granted freely from the heart of God.”

Producer Aaron Burns cites a biblical parallel supporting her contention:  “[God] saved us, not because of the righteous things we had done, but because of his mercy. He washed away our sins, giving us a new birth and new life through the Holy Spirit.”  Burns sees this divine intervention and regeneration as the positive news that the film conveys.

This entertaining film did incorporate one plot element that puzzled me.  The story’s climax hinges on technology that seems anachronistic, a Benjamin Franklin extrapolation that borders on Sci-Fi, given the era.  (Franklin’s a character in the film.)  Perhaps it’s a nod to Wild Wild West-style futuristic gizmos and gadgets.  You can decide for yourself if it makes sense.

Beyond the Mask opens April 6 at Providence Place Mall in Providence and Silver City Galleria in Taunton. For additional information please visit  www.BeyondTheMaskMovie.com.