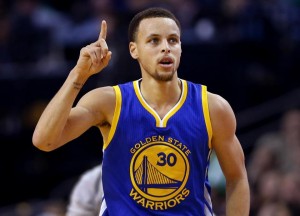 OAKLAND, Calif. (BP) — Stephen Curry has been writing Philippians 4:13 on his basketball shoes since his first college practice, but it was another passage from the biblical book that may have helped him and his Golden State teammates reach the NBA Finals.

At halftime of game 7 in the Western Conference finals, the Warriors looked out of sorts on the road at Houston. The Rockets had a double-digit lead and Curry appeared to be struggling, along with the rest of his team. The all-star point guard had only 8 points on 3-of-10 shooting in the first half. He needed something to help him regain his focus.

So, according to Marcus Thompson in The Athletic, during halftime Curry pulled out his Bible app on his phone and read another familiar passage from Philippians 4:6-7: “Don’t worry about anything, but in everything, through prayer and petition with thanksgiving, present your requests to God. And the peace of God, which surpasses all understanding, will guard your hearts and minds in Christ Jesus.”

In the second half, Curry and the Warriors heated up. In the third quarter, Golden State outscored Houston 33-15, with Curry going 5-of-6 from the field and 4-of-5 from three-point range.

He finished with 27 points, 10 assists and nine rebounds, four steals and one block. He also had seven three-pointers, which has been done only once before in a game 7 — by Steph Curry in 2016.

He has made a habit of playing exceptionally well in the third quarter and second half this postseason.

“It’s been great to come out of the locker room kind of focused, locked in, made some shots, get some stops and just have fun,” Curry told ESPN. “Obviously, thankfully tonight with the way the first half went, it was like clockwork, so it was good.”

Another habit for Curry is writing Bible verses on his shoes.

It started his freshman year at Davidson College. His mom texted him her favorite verse, Romans 8:28, before his first practice and challenged him to find a verse for himself.

He chose Philippians 4:13, “I am able to do all things through him who strengthens me.” The verse has become so synonymous with Curry and his shoes that the star had Under Armor print the phrase “I can do all things” on his trademark shoe.

He has even worked in some more subtle faith references on his shoes. The grooves on the bottom use Morse code to reference Romans 8:28.

The NBA Finals begin Thursday, May 31, between the Warriors and the Cleveland Cavaliers.