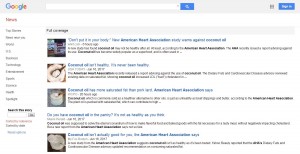 (Health Impact News) In what appears to be a coordinated attack against the rising popularity of coconut oil, the American Heart Association (AHA) has just published a “Presidential Advisory” on “Dietary Fats and Cardiovascular Disease” in which it condemned coconut oil, and recommended that people not consume it.

Yet, the mainstream corporate-funded media published its recommendations with no critical analysis or journalistic investigations into the AHA’s claims.

Here is an example of the headlines currently published by the corporate-sponsored “mainstream” media and promoted by Google News:

Coconut Oil: A Traditional Healthy Fat in the Food Chain for Thousands of Years

Living in the Philippines with my family in the late 1990s, I was able to observe firsthand how cultures like the Philippines who consume coconut oil as their main dietary oil in a traditional diet, a diet high in saturated fat, do not suffer from many of the western diseases in old age as much as westerners, including heart disease.

It led me to investigate this apparent paradox from what I had learned growing up in the U.S., and I soon published my findings on the Internet beginning in 2001. That growing body of research is now documented at CoconutOil.com, and is the Internet’s oldest website on the research regarding coconut oil, and other topics such as saturated fats, cholesterol, etc.

The scientific research behind the health benefits of coconut oil and good saturated fats in general is too numerous to reference in this article. We have an entire website documenting that research, and I have written a book about it as well.

Virgin Coconut Oil: How it has changed people’s lives, and how it can change yours!

This Time Magazine cover story from 2014 admitted that the theory condemning saturated fat as bad was wrong, and not based on science.

What “journalists” in the corporate-sponsored mainstream media fail to cover when they publish the AHA’s recommendations, is that their recommendations that people not consume coconut oil and saturated fats in general, is based on a belief, not actual science.

The belief is based on the now debunked lipid theory of heart disease, which states that consumption of saturated fats leads to elevated levels of cholesterol, which leads to an increase in heart disease.

Ancel Keyes was the original researcher to put forward this theory, which was later adopted by Congress as part of USDA dietary advice, and his research has been completely discredited. (See: Ancel Keys Was Wrong about Heart Disease and Cholesterol

Therefore, even the AHA’s “current” studies don’t actually prove that coconut oil is harmful. They start with the basic assumption that high cholesterol levels lead to heart disease, but that theory has never been proved by science, and in fact the science actually points to the opposite, that people with high levels of cholesterol actually live longer than those with low cholesterol. (See also: Japanese Research Exposes Statin Scam: People with High Cholesterol Live Longer)

Cholesterol used to be only labeled as “bad” and something to lower with drugs. But then in more recent times it was divided into two categories, “good” and “bad” cholesterol.

However, even this concept of cholesterol is not entirely accurate, as our bodies need both types of cholesterol to survive. (See: There Is Only One Type of Cholesterol: All of it Beneficial)

New Extensive Research From Sri Lanka Shows Coconut Oil Has No Risk to CVD, and that Coconut Residue has Great Promise for Treating Heart Disease

Coconut Oil is Beneficial for Your Heart: Shining the Truth on Mainstream Media’s Negative Attacks Against Coconut Oil

Are Big Pharma and Mainstream Media Continuing to Attack Coconut Oil to Protect Their Drug Market?

It is a well-known fact that historically drugs designed to lower cholesterol (statins) have been the most prescribed and most profitable drugs in the history of mankind. It is a $100 billion a year industry.

The cholesterol-lowering drug Lipitor is the best-selling drug of all time, grossing over $140 billion, with no serious close competitors in the history of pharmaceutical drugs.

It wasn’t until after the patent on Lipitor ran out, opening the door for cheaper generics to flood the market, that the FDA finally published warnings on the side effects of statin drugs, which include liver injury, memory loss, diabetes, muscle damage, and Type 2 diabetes.

One out of every four Americans over the age of 50 is taking a statin drug to lower their cholesterol, so this is a huge market that depends upon the success of the lipid theory of heart disease.

One of the best documentaries exposing the statin scam and interviewing doctors in the industry who have exposed it, was published in 2013 on ABC in Australia. The medical authorities were not successful in preventing it from being aired on TV, but they forced ABC to remove it from their website.

We currently are using copies available on YouTube. Take some time to watch these important documentaries produced by medical doctors on the statin drug scam, and be informed!

HEART OF THE MATTER Part 1: The Cholesterol Myth: Dietary Villains

HEART OF THE MATTER Part 2: The Cholesterol Drug War

While living in the Philippines in the late 1990s and early 2000s, I was one of the first ones to publish research on the Internet regarding the health benefits of coconut oil. We started using traditional methods to produce a hand-made coconut oil that was not over-refined and mass produced by machine.

By 2002 we were exporting this hand-made coconut oil to the U.S., and we were the first ones to bring a “Virgin Coconut Oil” from the Philippines to the U.S. market.

In 2005 the FDA issued warnings letters against us and Dr. Mercola, who was also selling our Virgin Coconut Oil at the time. They accused us of selling an “unapproved drug.”

We had to hire an expensive attorney to help us through the regulatory issues of marketing this new kind of coconut oil in the U.S., and we were forced to strip all references to scientific studies or customer testimonials about the health benefits of coconut oil from our website Tropical Traditions where the coconut oil was sold.

This was my first experience in understanding how any natural substance that can help or cure disease that is not part of the pharmaceutical industry is suppressed and censored in the United States affecting those who wish to make those products available to the public.

The mainstream media, in complying with this censorship of life-saving health information, is now a huge danger to public health.

Shortly after the AHA published their recommendations that were then republished without question or journalistic investigation by the mainstream media, I received the following inquiry as editor of Health Impact News:

Coconut oil has saved my life and my Memory! I am very disturbed about all these news reports etc about coconut oil and the raising of BAD cholesterol! PLEASE what are your thoughts or information on THIS subject! LOVE Coconut OIL!

One of the next new huge market potentials for the pharmaceutical industry is developing drugs that treat neurological diseases such as Alzheimer’s disease and Parkinson’s disease. There is strong evidence that the pharmaceutical industry, with their cholesterol-lowering statin drug products, is complicit with the alarming rise in these neurological diseases, since our brains need cholesterol to function properly, particularly later in life.

So as coconut oil continues to gain popularity and become a threat to dangerous pharmaceutical products, expect the attacks from the corporate-sponsored mainstream media to continue.