Washington, D.C. – The Louis D. Brandeis Center for Human Rights Under Law (LDB) today applauded the introduction of bipartisan legislation to help tackle the rising anti-Semitism plaguing U.S. schools. While anti-Semitism is on the rise across the U.S., the problem is particularly rampant on college campuses.

“The spike in anti-Semitic incidents in schools has forced Jewish students to face prejudice on their campuses, swastikas in their dorms and danger on their school grounds. No student should ever be singled-out or harassed due to their religious beliefs,” stated Alyza Lewin, LDB’s chief operating officer and director of policy. “However, while educators, legislators, and civil rights advocates all recognize the problem and are deeply alarmed, those tasked with investigating incidents have been left without the tools to properly address it. This bill provides the Department of Education with the guidance it needs to properly identify today’s manifestations of anti-Semitism, particularly those incidents that cross the line from protected anti-Israel expression to blatant anti-Semitic acts.”

According to the FBI’s Hate Crime Report, Jewish hate crime victims, outnumber victims of all other religious groups combined. And the problem is most serious in U.S. schools. A Brandeis Center/Trinity College study found that 54% of Jewish college students reported experiencing or witnessing anti-Semitism in 2014. And a February ADL report found that anti-Semitic incidents in K-12 schools and on college campuses nearly doubled between 2016 and 2017. 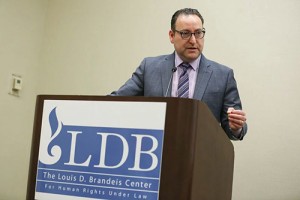 In addition, a U.S. Department of Education report, released just last month, which at the urging of the Brandeis Center, for the first time, included statistics on religiously-motivated bullying and harassment in K-12 schools, found an alarming 10,848 incidents based on religion in 2015-2016. Recent incidents motivated by anti-Semitism include: a Jewish boy in Florida who was pinned down while a swastika and a fake concentration camp number were drawn on his arm; in New York, a Jewish boy who was verbally harassed and had hot wax poured on his skin; and in Maryland, two Jewish students who were followed by two suspects shouting, “F* the Jews” and then punched in the face.

Until a dozen years ago, the Department of Education declined jurisdiction in cases involving claims of anti-Semitism since statues only covered such traits as race, color, national origin, sex, age and disability. In 2004, then head of the U.S. Department of Education’s Office for Civil Rights and now president of LDB, Kenneth L. Marcus, drafted a policy ensuring that Jewish, Sikh and Muslim students were protected from ethnic and ancestral discrimination under Title VI of the Civil Rights Act of 1964. However, unlike in policies under which federal authorities investigate civil rights claims such as sexual harassment, this policy did not include a definition of anti-Semitism, leaving authorities ill-equipped to properly recognize anti-Semitism.

The Brandeis Center has been advocating for many years to have Congress address this obstacle, and the legislation, introduced late yesterday, aims to do just that. It provides federal authorizes with a clear and uniform definition to recognize anti-Jewish bigotry. The definition included in the bill is the global “gold standard” used to define anti-Semitism, and is used by the U.S. federal government to assess incidents that occur abroad. It is substantially similar to the definition that has been supported by the 31 governments that are members of the International Holocaust Remembrance Alliance; all 50 countries, except for Russia, that make up the Organization for Security and Cooperation in Europe; and the governments of the United Kingdom, Romania, Austria, Germany and Bulgaria. It has also been adopted by the United Kingdom to use in colleges and universities.

Contrary to misunderstandings about the bill, the legislation does nothing to infringe on First Amendment rights. The bill will not regulate or restrict free speech or academic freedom by any means. It simply provides federal authorities with a definition of anti-Semitism to be used to investigate behaviors that are not protected by the First Amendment, including assault, battery and vandalism.

The Brandeis Center helped pass a similar law recently in South Carolina, and is working with other states to pass legislation to combat rising anti-Semitism in U.S. schools.

The bill is also supported by the Anti-Defamation League (ADL), Simon Wiesenthal Center and the American Jewish Committee (AJC).