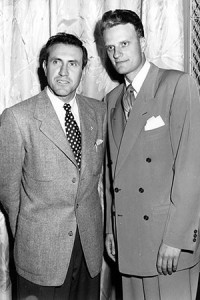 CHARLOTTE, N.C. — The Billy Graham Evangelistic Association will release a new documentary film on Dec. 25 called Louis Zamperini: Captured by Grace. Zamperini is also the subject of Universal Pictures’ Unbroken, the movie based on the best-selling book of the same name by Laura Hillenbrand.
Captured by Grace is a compelling, documentary-style film that chronicles Zamperini’s remarkable journey – from Olympic runner to WWII prisoner of war – all the way to his return home and encounter with Jesus Christ at a Billy Graham Crusade in Los Angeles in 1949. The film includes recent interview footage of Zamperini sharing his complete story in his own words.

“I started to leave the tent meeting, and I felt awful guilty about my life,” Zamperini says about his experience at the 1949 Billy Graham Crusade held in a constructed tent on the corner of Washington and Hill streets in Los Angeles. “Yes, I had a lot of great times, a lot of great experience, a lot of escape from death, but I still didn’t like my life after the war. I came home alive. God kept His promise. I didn’t keep mine, and so I went forward and accepted Christ.”

“The heart of this story is when I found Christ as my Savior,” Zamperini continues. “That’s the heart of my whole life.”

Captured by Grace can be viewed online starting Dec. 25, and will be available via DVD as an offer of appreciation with any contribution to the Billy Graham Evangelistic Association. For more information, to watch a short trailer for the film, or preorder a copy, visit www.billygraham.org/unbroken. 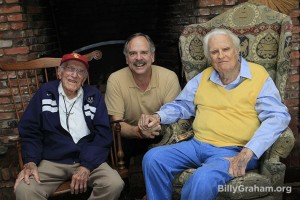 Zamperini, who passed away earlier this year, visited Billy Graham in June of 2011 at his home in Montreat, N.C. At age 94, he also visited the Billy Graham Library where he signed copies of the New York Times bestseller Unbroken and greeted many WWII veterans. Up until his passing, Zamperini was an inspirational speaker and shared his life-changing testimony at several of Graham’s Crusades, including San Francisco (1958) and Los Angeles (1963).

This coming New Year’s Day, Will Graham, at the request of the City of Torrance, will represent his grandfather Billy Graham at the 126th Rose Parade on Zamperini’s hometown float. The parade’s theme for 2015 is “Inspiring Stories.” Zamperini was selected earlier this year to be the Grand Marshall of the annual event, and despite his passing, the Tournament of Roses Committee decided to use the opportunity to honor his life.