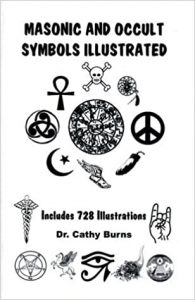 Do not be deceived: Freemasonry depicts Yin and Yang a little differently than a traditional New Age, or occultist, or Satanist. They use the hexagram and the black and white tile floors; but, their belief in Yin and Yang is identical to the Satanist Mysteries. But, why should we be surprised, for Albert Pike told us that Freemasonry is “identical to the Mysteries.” (from Masonic and Occult Symbols Illustrated)

“In both European and Oriental traditions, the Unicorn is identified with a Messiah who comes when the world is in danger and who heralds the coming of a new and better age.” (The Living Unicorn, Carver, Minnesota, The Living Unicorn, Inc., 1980, p. 3, as quoted by Burns, p. 145)

“Thus we see that the unicorn is, in reality, the symbol of a future conqueror who will bring peace to the earth. Who is this but the Antichrist … for whom the world waits, unaware of his true nature? (Dr. Cathy Burns, “Masonic and Occult Symbols Illustrated”, p. 144)

“In Celtic mythology and European folklore, a fabulous beast [comes] in the form of a horse, with a single spiraling horn growing from the center of its brow. In alchemy, [it is] a symbol of the complete mastery of phallic sexuality by ritual intercourse and its conversion into the forces of pure visualization.” (Maurice Bessie, A Pictorial History of Magic and the Supernatural,– occult author — p. 128, quoted by Burns, p. 145)

Wonderful! Do you want your child to subliminally be conditioned to the horn of the unicorn as a phallic symbol of intercourse? Of course not, but then you are probably not a pagan, who worships sex.

“… the Rothschilds have a unicorn on their coat-of-arms.” (Burns, p. 145) Now, we know the Unicorn is a major Illuminist symbol, and a symbol of their future Superman, the New Age Christ (Antichrist).