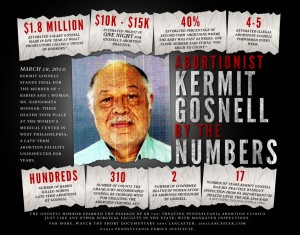 Going to the movies is one of America’s favorite pastimes. Movies entertain and amuse, but the best of them bring attention to important issues facing our society. Such is the case with an upcoming release, and while it is not a family film by any means, it may be the most important film you ever see.

For those of us who fight for life, we are well aware of the atrocities committed against the unborn by “Dr.” Kermit Gosnell. Now, some daring filmmakers have fought to have his story told to bring light to the horrific slaughter of aborted babies.

Gosnell owned the Women’s Medical Society Clinic in Philadelphia, Pennsylvania. The fact that he was an abortion provider who committed thousands of murders is unbearable enough, but this so-called physician took his practice to levels of evil that are impossible to comprehend.

Gosnell had no regard for innocent life – that much is obvious. But he also had no regard for the law, the lives of the women he treated, or his oath as a medical practitioner. Gosnell was charged in 2011 with eight counts of murder, dozens of felonies for violating Pennsylvania’s 24-week time limit on abortions, and hundreds of charges of violating informed consent laws.

The murder charges stemmed from the death of one mother during a botched abortion, as well as the infanticide of seven babies who were born alive. Gosnell severed their spinal cords after birth because they failed to die during the abortion procedures. But with the thousands of abortions that Gosnell performed, those seven are likely not the only babies murdered after birth.

He was convicted for many of the charges in 2014 – although only three of the babies killed after being born alive were given any justice. Other charges were modified or dropped in negotiations during trial. Gosnell waived his right to appeal to spare his own life, something his victims never had a chance to experience. He was sentenced to life without the possibility of parole.

Gosnell: The Trial Of America’s Biggest Serial Killer hits limited theaters on October 12th. The facts of the case, however, are not the main focus of this new film. What the filmmakers really want people to understand is just how horrific abortion is – and why it must end altogether.

Gosnell’s clinic was only brought to the attention of law enforcement because of unrelated reports that he was prescribing copious amounts of the highly addictive painkiller, Oxycontin.

When his office was raided, the conditions were deplorable. Blood-stained towels and sheets lined the rooms, flea-ridden cats roamed the clinic freely, and hundreds of aborted babies – and their severed body parts – were discovered in freezers, jars, and containers. Officers described it as the closest thing to hell they could ever envision.

But the atrocities committed by Gosnell are not well-known to many outside the pro-life movement. The media wouldn’t touch the story, avoiding anything that would destroy the left’s argument that abortion “isn’t murder.” These filmmakers plan to change that.

Hat Tip Films is owned by husband-and-wife team Ann McElhinney and Phelim McAleer, who faced many challenges in bringing the film to the public. 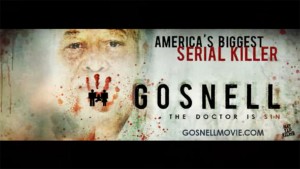 Hollywood and the media are notorious for blocking any content that may have a conservative nature, and no one in the industry was interested in bringing Gosnell’s house of horrors to the public’s attention.

According to LifeNews, producer Ann McElhinney told MRC Culture this summer that “finally the Gosnell story will be exposed. Most Americans have never heard the name Dr. Kermit Gosnell because the mainstream journalists chose not to cover the trail,” she said, because “the left don’t want the truth about abortion to be known.”

“So Hollywood didn’t want to touch this film…You know Hollywood, they give themselves awards for bravery, but they’re not that brave,” McAleer said.

The filmmakers struggled to find anyone willing to support their movie and turned to a public crowdfunding campaign to get it made. They were originally censored by crowdfunding site Kickstarter for violating their community standards because the crew used terms like “murdering babies” in their description of the project.

They then turned to Indiegogo and shattered fundraising records for the site. It was obvious that the film would have a huge effect on its viewers, and pro-lifers wanted it made.

They hope that the film will be the catalyst for changing people’s minds about abortion. It is not a woman’s right to choose to destroy another human being’s life. It is not a simple, elective medical procedure with no consequences. Children are being murdered, and they want this graphic story to effect change.

McElhinney and McAleer are experts on the Gosnell story, having interviewed him, writing a best-selling book on the case, and now producing the movie. They want their voices heard and their experiences being on the frontlines of this atrocity seen.

Pro-lifers are encouraged to bring their friends and family to see the movie – especially those who call themselves “pro-choice” or say it is not their place to get involved.

There is no grey area with abortion. We are all called to stop the slaughter of the unborn. And this story of one man’s evil crimes should be a wake-up call to anyone who has turned a blind eye to the abortion issue.