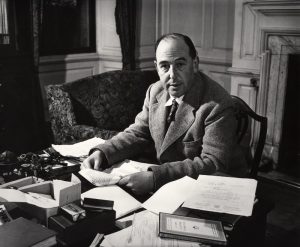 “The safest road to Hell is the gradual one – the gentle slope, soft underfoot, without sudden turnings, without milestones, without signposts”

His death went unnoticed, as he died the same day John F. Kennedy was shot. His books are some of the most widely read in English literature, with over 200 million sold worldwide. Nearly 50 years after his death, his books continue to sell a million copies a year.

His name was Clive Staples Lewis, born NOVEMBER 29, 1898. At age 19, he fought in the trenches in World War I. After the War, C.S. Lewis taught at Magdalen College, Oxford, 1925-54; and was professor of Medieval and Renaissance English at Cambridge University, 1954-1963.

Originally an agnostic, C.S. Lewis credited his Catholic colleague at Oxford, J.R.R. Tolkien, whom he met in 1926, as being instrumental in his coming to faith in Jesus Christ. J.R.R. Tolkien wrote The Hobbit, 1937, and Lord of the Rings, 1937-1949, which is one of the best-selling novels ever written–with over 150 million copies sold.

Lewis was also influenced by G.K. Chesterton’s book, The Everlasting Man (1925), written in rebuttal of H.G. Wells’ The Outline of History.  C.S. Lewis credited George MacDonald’s writings as baptizing his imagination, and he credited G.K. Chesterton’s book, The Everlasting Man, as baptizing his intellect, describing it as “the best popular apologetic I know.”

Lewis wrote, “The best popular defense of the full Christian position I know is G.K. Chesterton’s The Everlasting Man.”

In Surprised by Joy, 1955, C.S. Lewis described how he resisted “kicking, struggling, resentful, and darting his eyes in every direction for a chance to escape,” until in 1929 he came to believe in God:

“You must picture me alone in that room in Magdalen (College, Oxford) night after night, feeling, whenever my mind lifted even for a second from my work, the steady, unrelenting approach of Him whom I so earnestly desired not to meet… That which I greatly feared had at last come upon me.

In the Trinity Term of 1929 I gave in, and admitted that God was God, and knelt and prayed: perhaps, that night, the most dejected and reluctant convert in all England.”

In 1931, after a late-night discussion with J.R.R. Tolkien and Hugo Dyson, Lewis described his deepening spiritual journey in Surprised by Joy: “I know very well when, but hardly how, the final step was taken. I was driven to Whipsnade Zoo one sunny morning. When we set out I did not believe that Jesus Christ is the Son of God, and when we reached to zoo, I did. Yet I had not exactly spent the journey in thought. Nor in great emotion. ‘Emotional’ is perhaps the last word we can apply to some of the most important events.

It was more like when a man, after long sleep, still lying motionless in bed, becomes aware that he is now awake. … And it was, like that moment on top of the bus, ambiguous. Freedom, or necessity? Or do they differ at their maximum? At that maximum a man is what he does; there is nothing of him left over or outside the act.

Wallaby Wood, with the birds singing overhead and the blue-bells underfoot and the Wallabies hopping all round one, was almost Eden come again.”

Among C.S. Lewis’ most notable books are: 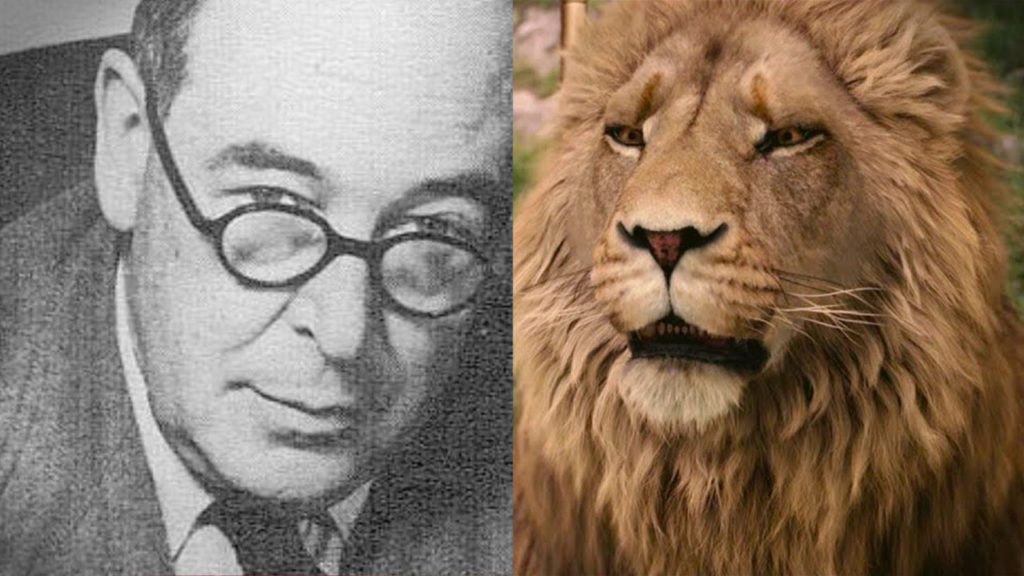 Lewis stated in The Oxford Socratic Club (1944. pp. 154-165): “If … I swallow the scientific cosmology as a whole, then not only can I not fit in Christianity, but I cannot even fit science. If minds are wholly dependent on brains, and brains on bio-chemistry, and bio-chemistry (in the long run) on the meaningless flux of atoms, I cannot understand how the thought of those minds should have any more significance than the sound of the wind in the trees.”

In The Problem of Pain, Lewis wrote: “The human spirit will not even begin to try to surrender self-will as long as all seems to be well with it. Now error and sin both have this property, that the deeper they are the less their victim suspects their existence; they are masked evil. Pain is unmasked, unmistakable evil; every man knows that something is wrong when he is being hurt … God whispers to us in our pleasures, speaks in our conscience, but shouts in our pains: it is His megaphone to rouse a deaf world … No doubt pain as God’s megaphone is a terrible instrument; it may lead to final and unrepented rebellion.

But it gives the only opportunity the bad man can have for amendment, it removes the veil; it plants the flag of truth within the fortress of the rebel soul … Suffering is not good in itself. What is good in any painful experience is, for the sufferer, his submission to the will of God …  If tribulation is a necessary element in redemption, we must anticipate that it will never cease till God sees the world to be either redeemed or no further redeemable.”

In Mere Christianity, 1952, C.S. Lewis wrote:  “All that we call human history – money, poverty, ambition, war, prostitution, classes, empires, slavery – is the long terrible story of man trying to find something other than God which will make him happy.”

Lewis expressed in Mere Christianity, 1952: “I am trying here to prevent anyone saying the really foolish thing that people often say about Him: ‘I’m ready to accept Jesus as a great moral teacher, but I don’t accept his claim to be God.’ That is the one thing we must not say.

A man who was merely a man and said the sort of things Jesus said would not be a great moral teacher. He would either be a lunatic – on the level with the man who says he is a poached egg – or else he would be the Devil of Hell.

… You must make your choice. Either this man was, and is, the Son of God, or else a madman or something worse.

You can shut him up for a fool, you can spit at him and kill him as a demon or you can fall at his feet and call him Lord and God, but let us not come with any patronizing nonsense about his being a great human teacher. He has not left that open to us. He did not intend to.”

In The Screwtape Letters, 1942, Lewis wrote: “The safest road to Hell is the gradual one – the gentle slope, soft underfoot, without sudden turnings, without milestones, without signposts.”

In the final chapter of The Abolition of Man, 1943, Lewis warned: “I am very doubtful whether history shows us one example of a man who, having stepped outside traditional morality and attained power, has used that power benevolently.” 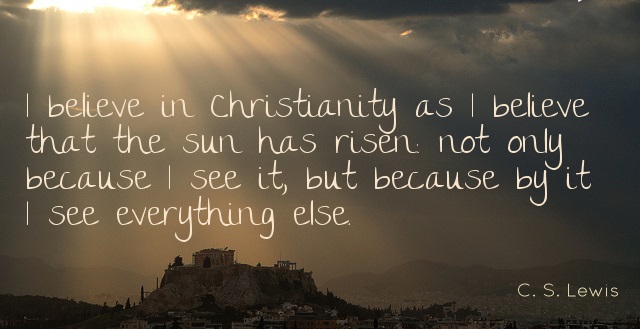 Lewis wrote: “Christianity … is a religion you could not have guessed … ‘ It is not the sort of thing anyone would have made up. It has just that queer twist about it that real things have.”

He wrote in Mere Christianity, 1952:  “The Eternal Being, who knows everything and who created the whole universe, became not only a man but (before that) a baby, and before that a fetus in a woman’s body.”

In Mere Christianity, C.S. Lewis wrote: “God made us: invented us as a man invents an engine. A car is made to run on petrol, and it would not run properly on anything else. Now God designed 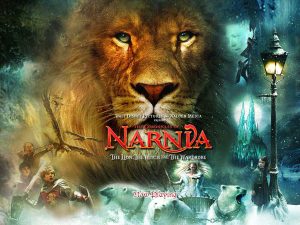 the human machine to run on Himself.

That is why it is just no good asking God to make us happy in our own way without bothering about religion. God cannot give us a happiness and peace apart from Himself, because it is not there. There is no such thing”