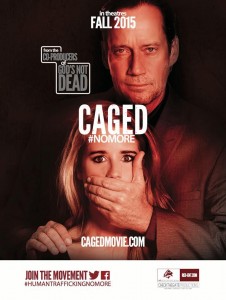 “This was an amazing put together film that not only entertains but educates the audience on an issue that is very time-sensitive. Creative, pertinent, and well done!” said Leslie LaPage, founder and director of the La Femme Film Festival.

“We’ve achieved making a film that is not only thrilling and compelling, but calls audiences to be champions in the fight against human trafficking,” said Lisa Arnold, director, co-writer and producer of CAGED NO MORE. “We are grateful for the support of amazing film festivals like La Femme who recognize that movies can reach beyond the screen and inspire greatness!”

CAGED NO MORE is a drama meant to engage and educate audiences on the realities of human trafficking. The film releases January 15, 2016 nationwide. The film was also the top award winner at the Kingdomwood film festival in October 2015.

Inspired by real events, CAGED NO MORE is the story of Aggie Prejean (Devine), a grandmother on a desperate search to find her two granddaughters, Skye (Gifford) and Elle, who have been kidnapped by their sinister father (Sorbo). As the details behind the girls’ disappearance begin to unravel, it’s discovered that they have been taken overseas to be sold into the sex trade. Aggie enlists the help of the girls’ uncle, a well-respected local philanthropist, Richard DuLonde (also played by Sorbo), and his son, Wil (Powell), who is former Special Forces. A global hunt ensues, and the team will stop at nothing to see the girls safely returned home.