“We don’t expect this to be an easy case,”  Rackauckas said in a press conference Wednesday morning. “But this district attorney’s office has a long track record of handling serious and complicated consumer protection cases, and we believe that we are going to continue our commitment to fighting consumer fraud, and this will just be another case.” 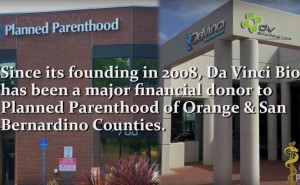 State and federal law forbid financial profit from fetal tissue sales, but companies may charge a handling fee. Invoices obtained by subpoena show Da Vinci Biosciences charged steep packing and handling fees, on top of hundreds of dollars for fetal parts, profiting up to $674 for a heart, $233 for a liver, $221 for a stomach, and $664 for a small intestine.

Da Vinci Bioscience and DV Biologics racked up $56,678 in “packing and handling fees” between 2009 and 2015, when Planned Parenthood stopped providing aborted fetal tissue.

The companies intentionally set prices “as high as possible,” Rackauckas said, to ensure a profit. For instance, a 2009 DV Biologics email notes that if a “product” costing $25 to “manufacture” is priced at $170, a 50 percent discount still leaves the company with a $60 profit.

The company gave employees freedom to offer steep discounts to boost sales and also ran regular promotions, such as a 25 percent off “fall promotion” in 2013. Employees also “randomly” sold baby parts at different prices to different customers, Rackauckas said, with the lowest prices going to overseas markets in Japan, China, Korea, Germany, and elsewhere, and the highest prices going to domestic researchers.

“This illustrates the boldness of their unlawful profit-making business scheme,” Rackauckas said.

Most sales reaped a 70 percent profit, he said.

After announcing the suit, Rackauckas deflected multiple reporters’ questions regarding the involvement of Planned Parenthood. “Our evidence indicates that money was never exchanged between these companies and Planned Parenthood,” he said.

“It’s legal to donate fetuses for research purposes,” he said. “We’re not indicating that Planned Parenthood did anything unlawful.”

But David Daleiden, founder of the Center for Medical Progress, disagrees, noting if the tissue trade middlemen are guilty, so is Planned Parenthood, as a primary accomplice.

“The wheels of justice are beginning to turn against Planned Parenthood and their corrupt business partners in the illicit trade in aborted baby body parts,” Daleiden said. “Planned Parenthood is not above the law, and law enforcement and elected representatives everywhere must now hold Planned Parenthood accountable for their barbaric profiteering off of pregnant women and the body parts of their aborted children.”

“For nearly a year, critics of this panel’s fact-finding investigation have repeatedly called for it to be disbanded, saying there’s nothing to see here,” she said. “They claimed there was no wrongdoing in the fetal tissue industry.”

But the Orange County lawsuit proves “some fetal tissue middlemen may have broken the law,” Blackburn said, adding her panel would continue to scrutinize the links between Planned Parenthood and companies profiting from the sale of aborted babies.