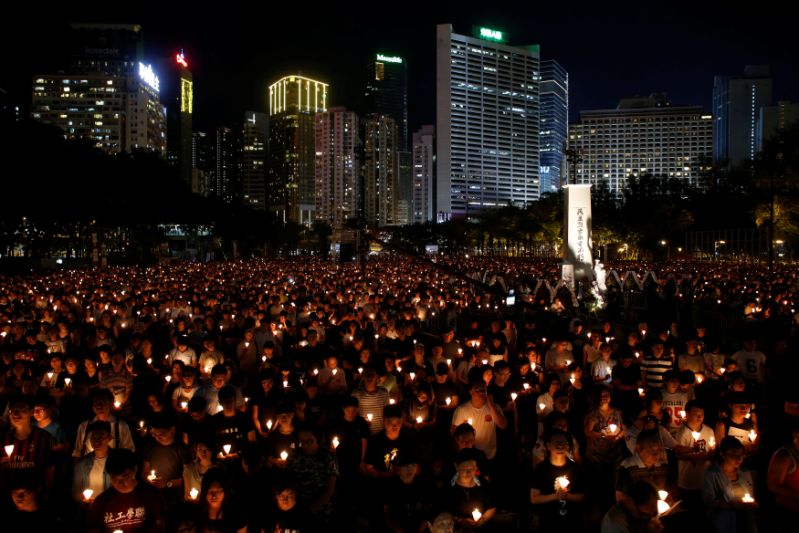 Thousands of people take part in a candlelight vigil to mark the 27th anniversary of the crackdown of pro-democracy movement at Beijing’s Tiananmen Square in 1989, at Victoria Park in Hong Kong June 4, 2016. REUTERS/Bobby Yip

After 27 years, activists continue to plead for freedom in one of the world’s most repressive countries

(WNS)–Twenty-seven years after Chinese soldiers cracked down on student protests at Tiananmen Square, mainland China continues to actively squelch any mention of the massacre and arrest sensitive figures on the June 4 anniversary. But in Hong Kong and Taiwan, where events are held annually, the tone is changing as the years go by. Today’s students were not yet born when the tank rolled down Chang’an Blvd., and they don’t see how the events of so long ago affect their lives today.

On June 4, 1989, the Chinese government sent troops to attack student protesters who had gathered at Tiananmen Square in Beijing, calling for greater reform in China. With assault rifles and tanks, troops killed hundreds, possibly thousands, of unarmed students and later claimed the protest was a counter-revolutionary riot. Every year on June 4, government censors work overtime, blocking even innocuous words like “today” or “when spring becomes summer” to mute discussion about the event, according to China Digital Times. Clever netizens continue to come up with new code words to skirt censorship such as “the square of 8” or “May 35th.”

This year, the Public Security Bureau increased surveillance and cut the phone lines of 79-year-old Ding Zilin, the co-founder of Tiananmen Mothers, a group of families whose children were killed during the protest. Tiananmen Mothers released a letter on June 1 stating that they have suffered “27 years of white terror and suffocation,” including detainment, threats, and surveillance by police.

“A government that unscrupulously slaughters its own fellow citizens … a government that forgets, conceals, and covers up the truth of historical suffering has no future—it is a government that continues to commit crimes,” the letter read. At the bottom, 131 members of the group signed their names.

Across the border in Hong Kong, 125,000 people gathered at Victoria Park for the annual candlelight vigil. This year, a dozen student groups boycotted the vigil and held rival events, representing a divide in Hong Kong’s democracy movement. Younger activists, who participated in the 2014 Umbrella Protests, no longer believe that a democratic China is possible and instead are calling for greater autonomy—or even independence—in Hong Kong. At one alternate event, a localist leader said Hong Kong should focus its energies on “building power” so China would have no choice but to grant it independence in the future, according to CNN.

As the Taiwanese also distance themselves from a Chinese identity, locals don’t think the Tiananmen Square Massacre matters to them. Many have never been to mainland China and only view the country as a bully that threatens Taiwan with missiles, kicks the island out of the international community, and prevents it from official independence. On Saturday night, only about 200 people showed up to the anniversary event at Taipei’s Liberty Square. The location is significant: 27 years ago, 30,000 Taiwanese students filled the Square to stand in solidarity with the students across the strait.

The evening focused not only on the 1989 crackdown, but also on broader human rights issues in China, like the persecution or imprisonment of human rights lawyers, feminists, and democracy activists. Wu’er Kaixi, a former Tiananmen student leader, took the stage and noted it wasn’t Taiwan or Hong Kong’s responsibility to bring about a democratic China, but that it would “protect their freedom” if China were to become a democracy. Tseng Chien-yuan of the online New School for Democracy, noted that June 4 influenced Taiwan’s own democratic journey: A year after the massacre, Taiwanese students marched on Liberty Square to call for direct elections, which led then-president Lee Teng-Hui to agree to full democracy in Taiwan.

“I don’t think they would have made that decision if it weren’t for June 4. … We can’t forget that someone had to pay the price,” Tseng noted.

A day earlier, a bipartisan group of Taiwanese lawmakers held a commemorative ceremony for the Tiananmen Square Massacre for the first time, calling on the Chinese government to allow open discussion about the event, to take responsibility and apologize for its actions, and to punish those responsible. In a Facebook post, President Tsai Ing-Wen said China could learn from Taiwan’s path to democracy.

“Do not let June 4th forever be unspoken between the two sides,” she wrote. “Only the ruling party on the other side can heal the past wounds and pain of the Chinese people.”

Wu’er, who now lives in Taiwan, said the past 27 years have been difficult. He is exiled from his home, his mother is forbidden from leaving China, and his teacher, Nobel Prize winner Liu Xiaobo, is imprisoned. In the past, he tried turning himself in to Chinese authorities so he could return to China. But they sent him back to Taiwan each time. He’s also watched with dismay as the international community, including the United States, bends to China’s will for economic gain. He wanted to remind Americans their country “is a country built on dreams and ideas, not just on markets and capitalism.”

“We had the support of the world when we took the streets of Beijing in 1989,” Wu’er told WORLD. “But then in the last twenty-some years that support is fading out. Sometimes we feel we are fighting an uphill battle and we are getting lonelier and lonelier.”