Can a ‘Barbaric’ Moses be Biblical?

In what could either be considered a genius marketing move, or quite detrimental, Christian Bale stirred things up with some controversial statements regarding the biblical figure. Speaking to reporters in Los Angeles, Bale didn’t hide the fact that he was trying to distance himself from Charlton Heston’s Moses in Cecil B. DeMille’s classic 1956 movie, “The Ten Commandments.”

“I think the man was likely schizophrenic and was one of the most barbaric individuals that I ever read about in my life,” Bale said about Moses. “He’s a very troubled and tumultuous man who fought greatly against God, against his calling.” 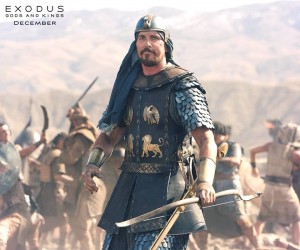 Whether these statements will hurt 20th Century Fox’s marketing abilities in the Christian market is unknown, but it has created quite the stir.

Paramount faced similar issues when the Director of “Noah,” Darren Aronofsky, made some controversial comments about his movie not being biblical. While much of the Christian community was divided over “Noah,” most viewers seemed disappointed, because it received a poor CinemaScore rating, although it ended up grossing more than $350 million worldwide.

Bale’s statements are concerning, not because Christians don’t see Moses as a conflicted man who struggled with God’s calling, because he was in fact that. What’s disconcerting is that Bale’s comments make it appear Ridley Scott has turned a hero of the Christian faith into a barbarian.

Now, it’s plausible that Christian Bale has a false perspective on the figure. In this regard, actors often misjudge their characters and the very nature of the movies. This happens because the actor is given part of the script and because the process of acting forces the actor to come up with ways to express the emotion.

Even writers get the message wrong. In a television interview, the famous homosexual writer Gore Vidal claims that his conflict in his script for the famous “Ben-Hur” was a homosexual love story. The audience, however, understood just from watching “Ben-Hur” that it was a story about the impact and redemption of Jesus Christ.

So, the moral of Christian Bale’s incorrect views on Moses is, “Don’t judge a movie by its actors or other production folks, but by the final product.” The proof is on the screen.

From what Movieguide has screened, the movie has great special effects. The clips show they really do want Christian audiences to love the movie, but they also want to reach out to others as if the movie is a biblical “Braveheart” – Moses fighting for the freedom of his people. Several scenes clearly give glory to God. The plagues are spectacular, sometimes almost too intense.

So, whatever Christian Bale ate for breakfast before the interview, Fox still has time to win over the Christian and Jewish communities, but there’s at least two things they’ll have to do – get it right and do it well.