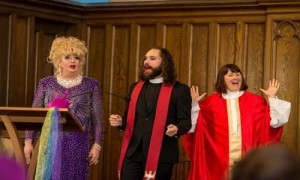 Ours is a generation that is increasingly bombarded by confusing messages on gender norms that are now under assault even from the church. From non-binary deacons that refuse to accept that they are either men or women to hyper-sexual, church-sponsored drag shows and transgender baptisms, the assault on Biblical values has intensified.

None would deny that the Gospel is a message of compassion and salvation but, in these churches, that message has been warped to take the shape of explicit support and even promotion of a life of gender confusion and sin rather than an ethic of faithful marriage between men and women.

The Methodist Deacon M. Barclay is now accepted as a non-binary Deacon in Chicago, which means that she prefers the pronoun “they” rather than “she” and doesn’t identify as either gender. In the Methodist Church, there are two orders of ministry: deacons and presbyters.

Equal in status but differing in roles, deacons are key members of the congregation and expected to provide wise counsel to fellow Methodists as well as help conduct the regular operation and worship services of the church that the presbyters (ministers) lead.

Deacon Barclay studied theology for 12 years and had originally tried to become a deacon in Texas but was rejected due to her personal and un-Biblical views on transgenderism. It was only after moving to Chicago that she was accepted into this leadership role, demonstrating the approval of the Methodist Church for transgenderism.

A member of the congregation struggling with gender identity confusion is understandable, but when that person both embraces this transgenderism and is elevated to the role of deacon, an entirely different message is sent: that the church and God support this life style.

Methodist churches are not the only protestant denominations that are starting to welcome the gender-confused into leadership roles. The First Baptist Church of Greenville began accepting LGBTQ ministers and weddings in 2015. It broke away from the Southern Baptist Convention in the 1990s but is now a part of Cooperative Baptist Fellowship.

The use of gender neutral pronouns and a discreetly held gender disorder may be exposing cracks in the Biblical nature of several protestant churches, but others have taken transgenderism much further. Sexualized drag shows, often aimed at children and teens from grades 6 to 12, are now being conducted in churches and billed as holiday events aimed at building tolerance.

The Ames United Church of Christ in Iowa, which has considered itself open and affirming of LGBTQIA people since 2000, held the most recent of these events on October 25th of this year.

The event promotion, published on the church’s Facebook page, assured parents that there would be “adult supervision” for the drag queen and king contest as the youngsters dressed in drag and paraded around, skirting the legal line of child sexual abuse.  With every step the church is working to recruit more teens and preteens into that lifestyle.

In the First Congregational United Church of Christ of Portland, under Minister Michael Ellick, an event was held in April of 2016 called “Drag me to Church” and the proceeds (a $5 entrance fee) were donated to a local LGBTQ community center.

The First Church Somerville UCC in Somerville, Massachusetts, has made their drag event a yearly affair since 2011. A multi-day celebration of the transgender lifestyle, it begins with a benefit concert given by performers in drag, the equal of any adults-only night club.

The performers include the drag queen Serenity Jones, among others. On Sunday, the Festival Worship again features Jones in drag, both performing and delivering a sermon. The pastors insert LGBTQ messages into the sermon as well and this is intermixed with gospel music and followed by church members, both children and adults, cross dressing as they eat brunch.

Sexualized drag shows aimed at both children and adults serve both to legitimize this un-Biblical life style and indoctrinate youth who may not know any better. In England, gender identity is being further confused by the new “baptism-style” ceremonies that allow a church member to have their new gender “selection” recognized by the Church of England.

The still-hotly-debated issue has divided the church with the Rev. Rachel Mann endorsing such baptisms, telling Christian today, “an opportunity to be publicly introduced to God is significant. I think this is what the proposed liturgy aims to do. It will be symbolically powerful.”

And she is right. It will represent a powerful movement farther away from Christian principles.

More than ever before, many churches are now embracing the gender confusion so prevalent in society today as they ordain clergy and indoctrinate youth to a life style counter to Christ’s teaching.