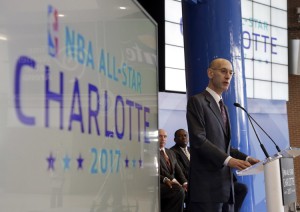 FILE – In this Tuesday, June 23, 2015 file photo NBA Commissioner Adam Silver speaks during a news conference to announce Charlotte, N.C., as the site of the 2017 NBA All-Star basketball game. The NBA is moving the 2017 All-Star Game out of Charlotte because of its objections to a North Carolina law that limits anti-discrimination protections for lesbian, gay and transgender people, Thursday, July 21, 2016. (AP Photo/Chuck Burton, File)

Media reports hint the new location will be the New Orleans Superdome—a facility with the same restroom policies as Charlotte’s Time Warner Arena, according to Tami Fitzgerald of NC Values. But in yesterday’s announcement, the NBA focused only on North Carolina.

The NBA’s decision infuriated U.S. Rep. Robert Pittenger, whose district includes Charlotte. In a letter to NBA Commissioner Adam Silver, Pittenger noted the organization’s hypocrisy as it expands into countries long-known for human rights abuses. He pointed specifically to China’s practice of “harvesting vital organs as part of their oppression of religious minorities.”

“Meanwhile, the NBA will start selling tickets for preseason games in China next week,” Pittenger wrote. “Is the NBA implying China’s abhorrent violation of basic human rights is acceptable, but North Carolina saying men shouldn’t use the girls’ locker rooms is a bridge too far?”

Fitzgerald, an attorney and executive director of NC Values, suggested in a press release the NBA could be held financially liable for breaking the contract. The city and state have honored their end of the contract in preparing for the event, including renovating Time Warner Arena, she noted.

Fitzgerald said the NBA will be hard pressed to find a city with an appropriate arena, hotels, and restaurants, as well as a city or state ordinance allowing biological males to use the women’s restrooms.

“It is ironic that the NBA would choose to relocate their All-Star game to the State of Louisiana, since last month the state joined North Carolina and 22 other states to stop President Obama’s transgender bathroom directive granting boys access into girls’ bathrooms, locker rooms, and shower facilities in schools and universities,” Fitzgerald said.