Chattanooga, A City Abortion-Free for 25 Years and Proud of It

“The closing of our last abortion clinic was an act of God.” – Dr. Dennis Bizzoco.

(Chattanooga, TN)— Twenty-five years ago, Chattanooga was embroiled in a heated debate over abortion. Today, all is quiet. Both abortion clinics are closed. Six area hospitals stopped doing abortions and Planned Parenthood left town. Not one doctor in town will admit to doing elective pregnancy terminations.

Many have remarked that “Chattanooga is an abortion-free city done right.” Even a local doctor who used to do abortions stated, “I think the pro-lifers here have been very responsible. They have used political, economic and social pressure to push their agenda, not violence.” – Chattanooga Times, 2/27/95

Others at the time made similar observations. A local medical ethics professor said, “To speak in favor of abortion in this town is like saying that you are in favor of sin.”

On May 20, 2018 at 2:00 p.m. there was a “Give Thanks to God” service at the National Memorial to the Unborn at 6230 Vance Rd. The public was invited to come and hear and give testimonies, sing and give thanks to God.

“On Sunday people of our city came together to celebrate 25 years of being abortion-free. We gave thanks to God,” said Charles Wysong, president of American Rights Coalition an organization that helps women sue abortion clinics for malpractice and is one of the organizers of the event. “Abortion may be legal but malpractice is not,” he declared. 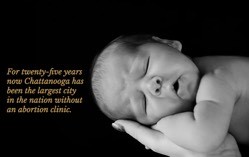 “Seeing Chattanooga become abortion-free is a great story, and we have created a website to help other cities become abortion-free, www.abortionfreecity.com.” said Wysong. Chattanooga pioneered the effort of targeting abortion clinics for malpractice. As the effort has spread to other communities, there has been a drastic drop in both clinics and abortions. In 1991 there were nearly 2,200 surgical abortion clinics nationwide, today that number is under 500. Abortions in that same period dropped from 1.6 million to 926,000. In 2017 Planned Parenthood closed 32 offices. Only 12% of US counties still have an abortion clinic.

“The closing of our last abortion clinic was an act of God. In a little over a year both clinic owners died of cancer. The building owner went into bankruptcy, and the federal court then ordered him to sell his house and clinic building to pay his creditors. A group of us raised over $300,000 in three days, went into court and outbid the abortionist for the building. We took possession of the building May 17, 1993 and kicked the abortion clinic out. The building now houses Choices Pregnancy Resource Center, a pro-life organization that helps women who are pregnant, and the National Memorial to the Unborn, an organization dealing with the grief and regrets of abortion,” said Dr. Dennis Bizzoco.

A number of pollsters have found Chattanooga to be the most pro-life city in the US.